Lost in Translation: Misconceptions from the outside on hip-hop, language and culture 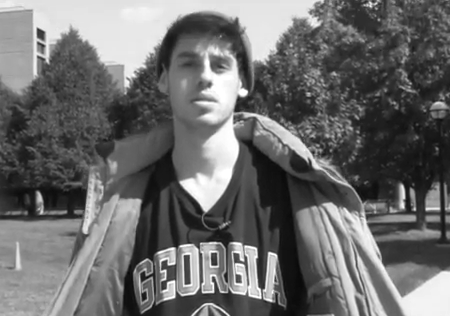 Not too long ago in a Maize and Blue (University of Michigan) galaxy far, far away, student government candidates Mike Proppe and Bobby Dishell performed a publicity stunt in order to get votes. They hired Da’Quan (a Michigan student and YouTube sensation) to film a video. In the video, like many of his others, he exploits common stereotypes that hound both Black and hip-hop culture in order to gain attention while simultaneously endorsing Proppe and Dishell. The public outcry that resulted from the video was harsh, as many student organizations complained to the University, which forced Proppe and Dishell to take it down and apologize for uploading such a racist video.

A comedian’s job is to push the envelope of what’s acceptable. If a comedian isn’t doing this, he or she probably isn’t successful. From Tosh.0 to Dave Chappelle, funny men habitually feed off racial stereotypes and misconceptions that have formed in the minds of Americans in order to generate entertaining content. In the case of Da’Quan, University of Michigan students Mike Proppe and Bobby Dishell obviously wanted something geared towards a younger audience that would generate publicity, no matter if it was positive or negative. Clearly, the negative aspects outweighed the positive, as they were forced to apologize for making the video because it was found to be inherently racist. I do believe that this video has many racist qualities to it (such as the name Da’Quan). Despite that, Da’Quan’s language is in no way, shape, or form improper or uneducated, and this is important because it is a microcosm of the lack of respect for hip-hop culture as a whole.

The way that Da’Quan talks (although he takes it over the top) in the video has become synonymous with hip-hop in today’s world and is often labeled as broken English. This idea could not be further from the truth, as the way Da’Quan talks is recognized by linguistic experts across the globe as an independent language, commonly referred to as Black Language or Ebonics. Michigan State University professor and distinguished scholar on Black Language, Geneva Smitherman, shoots down all of the misconceptions that constantly hound Black Language in her book, Talkin That Talk:

“Ebonics is emphatically not ‘broken’ English, nor ‘sloppy’ speech. Nor is it merely ‘slang.’ Nor is it some bizarre form of language spoken by baggy-pants-wearing Black youth. Ebonics is a set of communication patterns and practices resulting from Africans’ appropriation and transformation of a foreign tongue during the African Holocaust” (Smitherman 19)

This makes sense, as the dictionary defines a language as “a body of words and the systems for their use common to a people who are of the same community or nation, the same geographical area, or the same cultural tradition.” That definition of language, along with Smitherman’s point that Black Language has unique syntactic and phonological features, makes it clear that Black Language is its own individual language, as it originated from a group of people with a common cultural tradition.

On paper, the existence of Black Language sounds legitimate. The problem is that those who have not studied linguistics do not respect it as such. It is commonly referred to as “street slang” or other less than endearing names with negative connotations. This is due to the fact that the language originates from Black (as well as hip-hop) culture. Because of the dominant culture of white supremacy and “standard English,” Black Language fails to garner the respect it deserves. “Standard,” “proper” or anything along those lines are only arbitrary titles that the powers that be (White America) put on a certain way of speaking. Just because these words are not found in the Oxford English Dictionary doesn’t mean that they are not respectable or intelligent words. Fuck, a red line still appears under the word “frindle.”

Stanford professor and renowned linguistics expert H. Samy Alim articulates this concept a lot more elegantly than I can:

“The fact that is the language and communicative norms of those in power, in any society, that tend to be labeled as ‘standard,’ ‘official,’ ‘normal,’ ‘appropriate,’ ‘respectful,’ and so on, often goes unrecognized, particularly by the members of the dominating group” (Alim 57).

In this case, White America has completely ignored and demeaned an essential part of Black/hip-hop culture, and has punished blacks for not conforming to their standards. According to Wichita State professor William Thomas, “The way a person talks, a person’s language, is part of him, part of his culture, part of his self-pride, and part of his very identity” (4). From that viewpoint, it is easy to understand why hip-hop artists proudly use Black Language in their songs: Black Language represents their individuality, history and pride.

Calling Black Language improper (or any other adjective along those lines) also implies that the language is uneducated. I understand that Da’Quan takes it over the top (as any comedian would), but the way that he speaks in this video is not uneducated by any stretch. Labeling it as uneducated is practicing language supremacy, which is defined by Alim as the “unsubstantiated notion that certain linguistic norms are inherently superior to the linguistic norms of other communities” (Alim 13). How are we supposed to say one way of speaking is better than others? Is England’s form of English better than ours? Is Arabic superior to Spanish? This is a huge problem throughout America, and instead of disparaging somebody else’s way of speaking, we should be practicing language equanimity, which is described as the “structural and social equality of languages” (Alim 14). Honestly, I hang around people that are very “educated” and are attending some pretty esteemed colleges. Constantly, we pick up phrases that come from the mouths of these so-called “uneducated thugs” because they express our actions and feelings a lot better than “proper” English. Rather than harping on hip-hop artists for their illiteracy, we should be praising them for their ill literacy (shoutout to Alim for the wordplay). Dr. Smitherman put it best when she said: “hip-hop is a barely explored reservoir of linguistic riches” (Smitherman 155).

If anything, the ability to carve phrases and expressions from scratch that replace “standard” sayings reflects the remarkable capacity for creativity within hip-hop culture. What is considered hip-hop language is never constant and ever-changing; it’s flowing. This idea is perfectly summarized by Jubwa of the hip-hop group Soul Plantation when he explains:

“It’s not defined at any state in time, and it’s not in a permanent state. It’s sorta like—and this is just my opinion—it seems to be limitless. . . So, I feel that there’s no limit and there’s no real rules of structure, because they can be broken and changed at any time. And then a new consensus comes in, and then a new one will come in. And it will always change, and it will always be ever free-forming and flowing. . .” (Roc the Mic Right, 14)

This quotation can be attributed to hip-hop culture as a whole, as artists are constantly redefining what hip-hop is. From Anthrax’s contributions to Public Enemy’s “Bring tha Noize” to A$AP Rocky’s collaboration with Skrillex on “Wild for the Night,” the line between hip-hop and everything else is constantly being blurred.

The lack of respect in relation to the language of hip-hop is an issue that plagues the culture as a whole. For example, I remember listening to Kanye West’s “Family Business” in my car and my girlfriend’s mom told me to “Turn off that nonsense.” The fact that Kanye is a “rapper” formed such a negative preconception that she wouldn’t even give the song a chance. What made this so much more frustrating was the fact that “Family Business” is the worst song for her to call “nonsense” because it is an upbeat song reminiscing about all the great memories and experiences that come from having a tight knit family. ‘Ye even touches on the stereotypes that prevented her from understanding the meaning of the song: “I woke up early this morning with a new state of mind/A creative way to rhyme without usin’ knives and guns.” This was a Wesley Snipes-Woody Harrelson moment that happens to hip-hop fans on a regular basis: people unfamiliar with hip-hop listen to the music, but pre-existing stereotypes prevent them from hearing it. Anybody who has been in this situation can certainly relate to the frustration that I felt, as there was nothing I could do to get her to hear KanYe.

This preconceived notion that hip-hop brings nothing of substance to the metaphorical table ruins the experience of hip-hop for too many people. This misconception typically forms from the artists’ language, which is not a logical reason to discard an artist’s voice. I understand that some hip-hop artists’ intellectual ceilings top out at “fucking bitches and getting money,” but that should not prevent people from hearing conscious artists such as Talib Kweli or Kendrick Lamar, especially when these artists are the lone voices blowing the whistle on social injustices that go unnoticed in urban areas across the globe. Although people like Proppe, Dishell and Da’Quan mock the language of hip-hop, we must fight against these stereotypes ingrained in society regarding Black Language, because it is not until the mainstream media and the court of public opinion start respecting every aspect (including the language) of hip-hop culture that the essence of hip-hop can truly flourish.

5 thoughts on “Lost in Translation: Misconceptions from the outside on hip-hop, language and culture”