Album of the Week: “R.A.P. Music” by Killer Mike 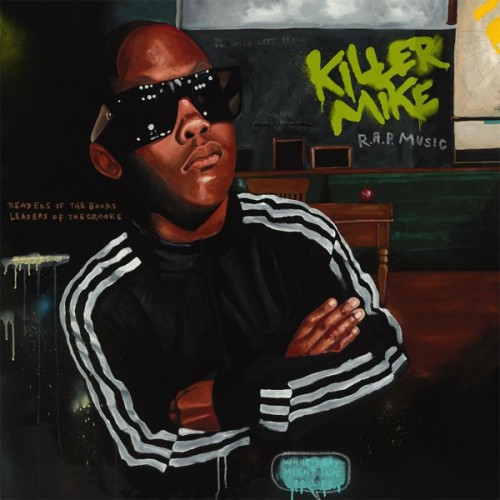 Last year Killer Mike joined forces with Brooklyn producer El-P and released the much-anticipated R.A.P. Music. Killer Mike’s sixth studio album encompasses the in your face, fearless and dubious persona audiences have come to expect from the Atlanta MC. Without intros, skits or interludes, this album runs for about forty-six minutes and is packed to the brim with Killer Mike’s unique perspective on the south, city life, politics, religion and the transformation of music throughout history. Hip-hop, like any musical genre, is ever changing. As we usher in a new decade with innovative sounds and concepts, R.A.P. Music merges classic hip-hop with newer production techniques.

The first track, “Big Beast,” is that forceful, fast paced banger with finger snaps, snare drums, and intense bass lines featuring Bun B, T.I., and Trouble.  These southern giants take turns on this posse cut, delivering memorable lines such as, “Listen to my Kimber .45 go bang / Bang, bang, Grindtime, rap game/ We the readers of the books and the leaders of the crooks.” Right off the bat, Killer Mike and El-P welcome the listener into what promises to be a wild ride of dope rhymes, phat beats and controversial topics.

While Killer Mike has politically charged lyrics, it is difficult to align him with a particular political ideology. As with his past albums, Killer Mike takes more of an apolitical stance, providing thoughtful anecdotes on our past, present and future.  This could not be more apparent on the sixth song entitled “Reagan.” In the first verse, Killer Mike focuses on “Reaganomics” and the crack-cocaine epidemic of the 1980’s. In the second verse Killer Mike brings these issues to a present day context. His apolitical position is unmistakable as he explains, “Ronald Reagan was an actor, not at all a factor / Just an employee of the country’s real masters / Just like the Bushes, Clinton and Obama.”  Killer Mike is getting at an important reality that we must recognize; the President of the United States, regardless of their party affiliation will fall victim to the status quo. This is true throughout history if you check the stats.

By the end of R.A.P Music, Killer Mike appears to be deep in thought. On the title track, he talks about how he sees hip-hop as a religion; his form of worship.  His second verse is comprised of shot outs to well-known musicians that came before him such as Muddy Waters, James Brown, Miles Davis, Jimi Hendrix, Nina Simone and Outkast. Something even more important happens on the final track. This song is important because it is an example of how hip-hop is a way of life, a way of being. Muddy Waters and Miles Davis might not be classified as hip-hop by ITunes, Spotify or Pandora. However, as Killer Mike makes clear, these artists are hip-hop because they changed the game in their respective eras. The best part about R.A.P. Music is the fact that in forty-six minutes, Killer Mike and El-P are able to take the listener to the far reaches of the hip-hop universe, and then bring you back in one piece.

The first time I heard Killer Mike I was actually in elementary school. My friend Andrew, who had introduced albums like Ludacris’ Word of Mouf to the group, played “The Whole World” by OutKast, and smacked in the song was a verse by Killer Mike. I was too young at the time to actually remember the name Killer Mike, or the record that “The Whole World” was featured on (Big Boi and Dre Present…OutKast), but lines like “Flisten, glisten, floss, gloss / Catch the beat running like Randy Moss” stuck with me until my knowledge would grow. Several mixtapes and albums later, I look at Killer Mike not only has a talented wordsmith, but also as an MC with something to say.

On the infallible R.A.P. Music, Killer Mike and producer El-P join forces to showcase an album that not only runs fluidly under one producer, but also appoints specific breaks for rare guest spot appearances. The structure of the album is dense and to a point, and conceptually it runs on a blueprint. As far as content, the album features the most soul and sincerity Mike has ever put-out, and songs like “Reagan” and “Anywhere But Here” run with this as they cover governmental corruption and problems with trickle-down economics. Elsewhere, Killer Mike goes off on the being and state of hip-hop (“R.A.P. Music”), abusive law enforcement (“Don’t Die”) and relationships (“Untitled”).

What’s important to note with these takes is that Killer Mike’s political stance and morals aren’t driven by over-blown conspiracy theories or pure hatred. In a way, he’s stringing along moderate beliefs to further the album as a whole. On R.A.P. Music it isn’t about the individual cuts, but rather the big picture, and this is a message that is often overlooked by artists when making a conceptual piece. Without a complete track, the message gets muffled, but in a full circle it’s too clear not to miss.

One thought on “Album of the Week: “R.A.P. Music” by Killer Mike”