One Step Forward, One Step Back: DOMA and The Voting Rights Act 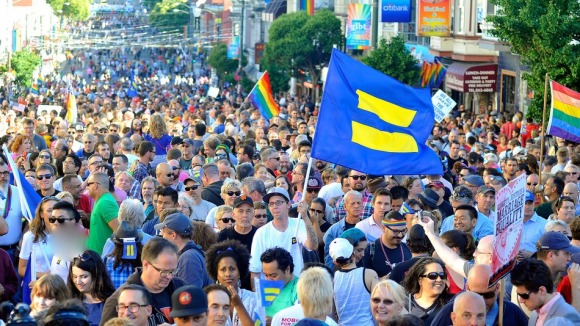 This past week the Supreme Court voted by a 5-4 margin on two cases that will have a lasting influence on future generations. On Wednesday, June 26th, the Supreme Court struck down the Defense of Marriage Act (DOMA)—which was signed by President Bill Clinton in 1996—as unconstitutional. This was a monumental victory for the LGBT community as DOMA prevented same-sex couples, whose marriages were recognized by their home state, from receiving the same benefits available to other married couples under federal law. Wednesday’s decision did not legalize same-sex marriage across the country, but it is an important step in the direction of marriage equity. The Supreme Court was praised for having the fortitude to make this decision (to see the absolute joy on people’s faces from images taken that day shows the magnitude of this decision for people all over the United States). As someone who has close friends that are a part of the LGBT community, the decision by the Supreme Court was long overdue. Hopefully, we will soon reach a point in our society where love is not a political issue.

However, on Tuesday, just one day before, the Supreme Court declared parts of the Voting Rights Act of 1965 as unconstitutional. It was voted that sections 4 and 5 be taken out, removing much of the staying power behind the bill. These sections were originally WRITTEN into the bill specifically to combat the legalized apartheid found in the south directed primarily at the African-American community following Civil War Reconstruction; otherwise known as the Jim Crow Era. Before this legislation was passed, voter discrimination was rampant across the United States.

The Voting Rights Act, and specifically sections 4 and 5, were put in place as a way for the Federal Government to determine which states must receive clearance from the Justice Department or a federal court in Washington before they made minor changes to voting procedures, like moving a polling place or redrawing electoral districts. These sections were extremely important, then and now, as discrimination can still be found around the polls today.

It appears that the main reason sections 4 and 5 were removed is because it is thought that they no longer apply in today’s society. Basically the court is saying what they teach in schools; racism ended with Dr. King’s “I Have A Dream” speech. It takes minimal effort to see that this is not the case and that racial prejudice continues to this day. According to a report done by The Brennan Center For Justice, If Section 5 Falls:  New Voting Restrictions, there were eight states that passed restrictive voting laws in 2012 and nine states that introduced restrictive voting laws in 2013. Some of these states include Alabama, Alaska, Arizona, Florida, Georgia, Louisiana, New York, New Hampshire, North Carolina, Texas and Virginia. In the report there are multiple examples of recent attempts by state and local governments to implement discriminatory voting changes. For example:

In 2001, the white mayor and the all-white Board of Aldermen for the small town of Kilmichael, Mississippi attempted to cancel an election shortly after black citizens became a majority of the registered voters. DOJ objected, finding the cancelation was designed to weaken African Americans’ voting strength. The town refused to reschedule the election until DOJ required it to hold one in 2003, when the town’s first African-American mayor and three African-American aldermen were elected (Perez & Agraharkar, 2013).

The city council of Fredericksburg, Virginia was preparing to adopt a redistricting plan in 2002 that would have dismantled its only majority black district. The council abandoned the idea when the city attorney warned that doing so would violate Section 5 (Perez & Agraharkar, 2013).

In 2006, DOJ objected to a decision by a Houston-area community college district to no longer conduct joint elections with several coextensive school districts. As a result, voters would have had to travel to two separate polling places in order to cast their ballots. The change also reduced the number of polling places from 84 to 12, which covered an area greater than 1,000 square miles and served more than 540,000 voters. In its letter objecting to the shift, DOJ noted the assignment of voters was “remarkably uneven,” as one polling site for the school board election with the smallest proportion of minority voters would serve 6,500 voters, while the most heavily minority site would serve more than 67,000 voters, 80 percent of whom were black or Latino (Perez & Agraharkar, 2013).

In 2012, the city council of Roxboro, North Carolina was considering a proposal to change its body from having two-year non-staggered terms to having four-year staggered terms. This would have made it more difficult for minorities to elect candidates of their choice by reducing the number of people on the ballot at each election. But after local advocates suggested the proposal would not survive Section 5, the city abandoned it, instead adopting longer, but non-staggered terms (Perez & Agraharkar, 2013).

Even this past week, on the same day as sections 4 and 5 were struck down as unconstitutional, Texas announced their decision that a voter identification law, that had been blocked, would go into effect immediately, and that redistricting maps would no longer need federal approval.

There are those who believe that with this decision, The Supreme Court has given Democrats a present in that it will encourage members of the African-American and Latina/o populations to frequent the polls like they did in 2008. New York Times writer Ross Douthat concludes his editorial by saying,

Eventually, this could turn out to be the case, and if so, that would be outstanding. However, this viewpoint ultimately misses the mark. Issues of race are still clearly prominent in this country; racism did not go away the minute after the mass movements of the so-called Civil Rights Era. If racist policies had vanished, there wouldn’t have been the War on Drugs, countless “Urban Renewal” projects that disproportionately affected African-American and Latina/o communities and the state of Arizona would not have banned the Mexican-American Studies Department in the Tucson Unified School District. If racist policies didn’t exist any longer, there would be no school to prison pipeline, and Michelle Alexander would not have written The New Jim Crow, condemning the prison system in the United States. Issues of race continue to play out in education, the work place, in voting and social situations everyday. Despite what some may say, the election of a biracial president did not end matters of race in the United States.

With the DOMA and voting rights decisions, the Supreme Court has given and taken away. On Wednesday there was immense rejoicing, as there should have been, all over the country. It is time to celebrate this monumental step towards marriage equity. However, before we celebrate, we must also consider the decision made just the day before. Are we actually making advancements in the realm of social progress, or are we taking a step forward and a step backward? Why are we praising the Supreme Court when both verdicts were reached by a 5-4 margin? Why was the removal of sections 4 and 5 not as publicized? Is it merely a coincidence that the Supreme Court announced the DOMA decision the day after, attempting to suppress the negative press that was surely to come? In what ways do racist/prejudicial ideologies persist in the United States and how might we combat them? Finally, as residents of the United States, how much longer are we going to sit around and accept the slow churn of politics before we do something about it?

All over the world, in places such as Brasil, Egypt and Turkey, people are taking to the streets to express their frustration over their country’s social, economic and political concerns. In Brasil, a country synonymous with soccer, the situation is so dire that protesters were willing to give up their chance to see Brasil win the Confederations Cup in order to make their voices heard. In the United States there are things such as healthcare, eight-hour workdays and weekends because of a huge labor movement that spanned for decades. In the case of the Voting Rights Act, the only reason it was ratified is because a generation of activists came together against all odds, demanding social, political, economic and racial equality. The government of the United States has never given anything to its citizens voluntarily. The freedoms that we enjoy are a direct result of ordinary people doing more than just listening to one news station and voting. It is a result of past generations educating themselves and seizing what was rightfully theirs. In a matter of minutes, five justices took that away. I hope Ross Douthat is correct and that the decision regarding the Voting Rights Act will somehow turn out to be a good thing, motivating people to make their voice heard at the polls. However, I am hoping for more than that. I hope that people across the country, regardless of race, religion, social class, gender and sexual orientation can take to the streets celebrating the defeat of DOMA, while also denouncing the verdict regarding the Voting Rights Act. We won’t get anywhere taking one step forward and one step back.