You can view Part One here

Earlier this summer, we sat down with artist, activist and educator Dylan AT Miner (Métis) to discuss how he incorporates elements of hip-hop into his artwork and teaching. Miner is a descendent of the Miner-Brissette-L’Hirondelle-Kennedy families with ancestral ties to Indigenous communities in the Great Lakes, prairies, and subarctic. He has collaborated with indigenous youth and artists to create spaces of reflection and resistance all around the world. He currently holds the position of assistant professor in the Residential College of the Arts and Humanities at Michigan State University.

Excerpts from this interview with Dylan Miner were taken on May 17th, 2013…

Bonus Cut (BC): In your exhibits you allow people to touch and interact with your artwork, but you never explicitly state this. What is the reasoning behind this and can you share an instance where somebody may have felt uncomfortable in that situation?

Dylan Miner (DM): As an artist, there’s a pedagogical role, a teaching element to what I do. We’ve all been trained in a school system that tells you what to learn, tells you how to act and tells you what to do. As an artist, I don’t want to create a space that does that. I’m part of an art collective called, Justseeds, and we do a lot of poster art, street art that’s re-posted throughout the world. That exists in the public sphere; it’s on the street for you to see just as other graffiti art is in the public sphere. The other part of my artistic practice exists in galleries and museums. As someone who grew up going to museums, takes my children to museums and has worked with youth taking them to galleries, we somehow get into this “art world” context where you all of a sudden get quiet, put your hands behind your back and act in a very different way. I think that creative practice, the arts, allow us a way of understanding and a way of interacting that we shouldn’t self-censor ourselves by not touching things. When I do artworks there are elements of participation and collaboration. From working with youth and elders making bicycles, by working with a filmmaker and hip-hop artist to make a short film and soundtrack, to doing installations in galleries where there are books that can be taken out, elements to be given away and taken. For me, it’s about challenging folks to change how they think and interact with works. Not telling them, “Hey, it’s okay to check this book out.” I’m not going to give you the directions to do it. If I expect the world to be different than I have to expect that people should be able to think and act differently as well. The one that you’re talking about was at the show where Bear Witness played at the reception. I created a library that was about 12-15 feet up in the gallery and there were all these books that were meant to be checked out. To do so, you had to feel comfortable climbing the ladder and bringing them back. There was a mutual respect in that you take my book, but you’ll bring it back. I’ll you give you this and you give me that. 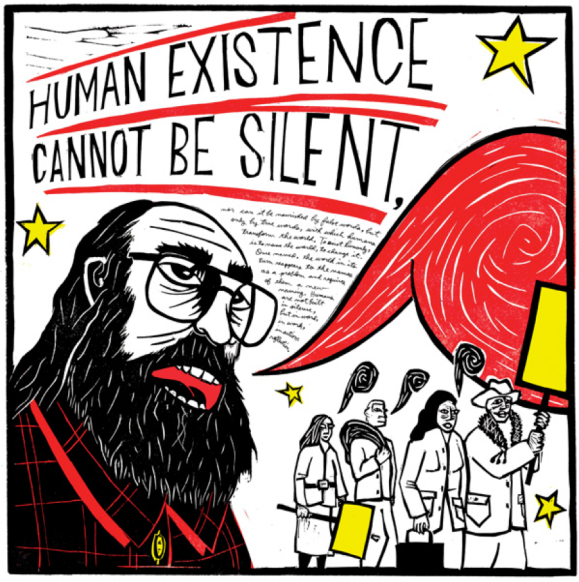 BC: That’s a very powerful idea because when you’re climbing up the ladder you’re putting yourself in a vulnerable position. For me, to have true education you have to have a sense of vulnerability and trust.

DM: Right, you’re vulnerable because you’re up on this ladder and you have to trust that I installed it properly. The materials and knowledge are accessible yet you have to go out of your way to obtain it. There are all of these subtexts to it that I think are interesting to think about. I did another project where I recorded stories. It’s an audio piece where I created a series of my own stories. I also had participants and gallery goers record their stories in a way that’s a conversation between us. So its about trust, sharing and conversation.

BC: What kind of books did you put up there?

DM: The English language title of that one is, Archive of Indigenous Radicalism, so it was all books written by native thinkers, speakers, scholars and artists about indigenous resistance and knowledge, so basically radical histories of native peoples. It’s part of a larger project that I’ve been participating in now for the last year where I’m recording oral histories of native resistance in this continent and throughout the world as well as accruing documents and putting together a library. It’s this art project under the guise of an archive.

BC: You mentioned story and the power of story. When you think about hip-hop in the musical sense an MC is telling their story through their lyrics. Can you expand on the power of story, why story is so important and what story even is from your point of view?

DM: Scholars have looked at hip-hop as the modern form of a griot, which is the African storyteller, troubadour figure. In this continent where I’m more familiar with what’s going on with indigenous peoples, there is a well known indigenous woman form British Columbia who talks about how native people don’t teach their children, they “story” them. Part of the learning process is in both telling stories but also co-creating stories, making stories. When you tell them again, you transform them and they become something new. For me, stories take a variety of different directions. Lyrics, hip-hop is about storytelling but you could even look at classic country music. Some of the early country and western singers out of Nashville and they were very much about telling stories. For me, hip-hop at its best, indigenous knowledge at its best is about using story as a way of communicating ideas but also empowering the teller and listener.

BC: Who were some of the pioneers of combing hip-hop with indigenous knowledge?

DM: The pioneer is probably John Trudell who’s a Lakota and Chicano guy. He put out an album that was spoken word over beats and that’s one of the early ones. That’s one of the fundamental ones. Its really come of age in the 90’s and 2000’s. In the early part of the 2000’s there was a tour of all indigenous hip-hop that toured throughout New Mexico and the U.S. Calgary, Alberta for whatever reason has a real big scene. There’s a Cherokee MC named Light Foot, he was the actor in Indian In The Cupboard. You can talk to different people and they’ll tell you different things. If you look at the origins of say the Zulu Nation, the Zulu Nation was really about the re-tribalization of Diasporic Africans. It’s about reconnecting with that. Many of the early Latino folks involved in New York were primarily Puerto Rican and there was Tiano, this Caribbean-indigenous element there as well. For me, I’m naming folks that self-identify as Native American or First Nations but if you look at some of the really early roots, there were also these other elements. With West Coast hip-hop and the Boo-ya Tribe, they were Samoan and brought the indigenous Samoan perspective to the table. Today, I am rocking A Tribe Called Red, as well as stuff that is coming out of Winnipeg, Manitoba, Canada. Subverso, a Mapuche MC from Chile and Detroit is one of my favorite.

BC: What are some projects that you have coming up?

DM: Hip-hop related stuff, I’m not so sure. I’ve done some research and writing on native graffiti, particularly here in the Great Lakes but also in Mexico. I’ve done some work in Oaxaca, looking at street art there. I curated a show of street art in Oaxaca, which along with Chapas, is the most heavily indigenous state in Mexico. The urban population in Oaxaca de Juarez, which is the main city, has a heavy indigenous presence. Many of the kids are into graffiti art and hip-hop. I’ve been looking at that and doing research, same thing in Detroit right now. Some of the most interesting graffiti writers such as Indio, an Ojibway guy, and Decolonize, a Chicano guy, are from Detroit. There’s interesting indigenous graffiti writers in Detroit that I want to work with. Other than that, I’ve just been doing some writing. I’m working on some non hip-hop related arts projects. One of which is called Michif-Michin which is an investigation of my family’s traditional medicine practices. So it’ll be me spending a lot of time in the woods, getting to know certain plant species that I should probably know, but I don’t. This summer I’m in residence at the Santa Fe Art Institute. Every summer in Santa Fe they have something called Indian Market, which is the biggest Native American art market in the world. This summer I’ll be living at the Santa Fe Art Institute for all of July and most of August creating low-rider bikes with youth from around there and those will be on exhibit as part of Indian Market. They’ll be around the city as well as at the Museum of Contemporary Native Arts.

BC: You mentioned earlier that there is hip-hop happening all over the world in places like Australia, New Zealand, Canada and Norway. Why do you think this is?

DM: I think it’s a beautiful art form. I think there’s a couple levels. One, if you look at black popular culture in this country, it is often seen around the world as a culture of resistance. With its roots in black and brown communities in New York, I think it’s globally seen as resistance. Another is that turntablism and lyricism can be mapped onto the specifics of place. It’s taking the elements and localizing it to what’s happening. If you look at what folks are doing throughout the world, they’re integrating their local musical traditions and instrumentation. What excites me the most is when you get stuff in indigenous languages, although many of the Sami artists will rap in English. I was talking earlier about working with kids in Detroit and Windsor to make these mobile screen-printing units. I worked in this place in Southwest Detroit called El Garage Cultural which is run by this dude, Ishmael Durán, who’s a Chilean musician in the Nuevo Canto tradition of the social justice music of the 60’s and 70’s that came out of the radical left in places like Chile and Cuba. One of the crazy things that I learned while I was making these was that for probably a decade I’ve been listening to this MC called Subverso, he’s this Chilean Mapuche, one of the large indigenous groups in South America. I’ve been listening to this guy, amazing stuff that combines the Nuevo Canto tradition into his hip-hop songs, borrowing and slicing from some of the most famous songs. What I found out was that Subverso is actually Ishmael Duran’s son who grew up in Santiago, Chile and Detroit. He now lives in Detroit so as I’m doing this workshop I meet this dude and it’s Subverso. I was totally tripped out because I’ve always seen him as working in Santiago but his dad was forced into exile to France during the dictatorship and then they made their way to Detroit. So now there’s this other crazy connection happening. I don’t know if you know his work but check it out, it’s beautiful. A few years ago when the student movements were happening in Santiago, he put out a song that was all about that. It’s the most amazing fusion of radical activist ideas with well thought out, beautiful lyrics and solid beats.

BC: Do you consider yourself a hip-hop artist?