Album of the Week: “Southernplayalisticadillacmuzik” by OutKast 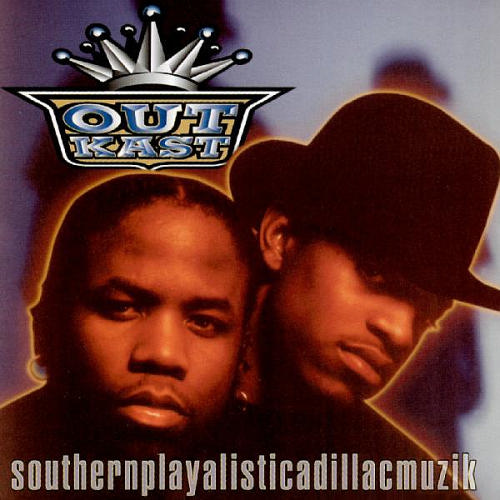 Southern hip-hop very rarely gets its due, and that may be in part because it’s still relatively young compared to other hip-hop regions. The Geto Boys broke the South in the late 80s and early 90s, and 2 Live Crew and UGK helped push the scene even further. However, Southern hip-hop was still a Wild West-like barren land just waiting to be explored. By 1994, the South was making its move, and it was in Atlanta where everything was taking shape.

In comes OutKast, the infamous duo of Andre 3000 and Big Boi, and out comes their 1994 debut Southernplayalisticadillacmuzik, an album ripe with lyrical recognition, groovy bass waves of seduction, turntable scratches and 808 rhythm clapping. A lot of what makes OutKast’s debut accessible is its mechanical sound that mixes East Coast boom-bat alteration and West Coast funk melodies, and on top of this you have two deeply contrasting lyricists with ‘Dre and Big Boi. By mixing unique rhyme sequences and tongue-twirling lyricism, OutKast brought in a true regional representation in record form. Take for instance “Ain’t No Thang”, a verbal onslaught filled with Southern slang like “ya’ll” and “you’se”. It’s here where OutKast shines on their debut, successfully showcasing Southern flare and pride for their city.

More importantly however is some of the subject matter. “Git Up, Git Out” preaches that teenagers should follow their dreams and put the drugs away. Featuring fellow Atlanta natives Goodie Mob, “Git Up, Git Out” is a simplistic yet essential song to the album’s overall message (“I thinkin of better shit to do with my time/ Never smelled aroma of diploma, but I write the deep ass rhymes“). On “Crumblin’ Erb”, OutKast explores black-on-black violence and how that has a negative effect on the African-American and black community as a whole (“Niggas killin’ niggas they don’t understand (that’s the master plan)/ I’m just crumblin’ erb, I’m just crumblin’ erb“). Comparatively, “Funky Ride” reassures us the need to keep calm and take everything in (“Ahh, relax your body next to me/ As I sing this OutKast melody/ On this funky ride/ So just relax baby“).

Southernplayalisticadillacmuzik is essential for its variety. It helped break the Southern hip-hop scene and Atlanta as a true representative for hip-hop, and it pushed for reform regarding social constraints on the black community and violence as a whole. Moreover, it encourages and pushes, and this is all while the Southern plunking of diverse hip-hop sound crashes all over. It may not be OutKast’s best record or most recognized, but when it’s all said and done, it’ll be their most important.

Music is an art form that is ever changing and evolving over time due to things such as creativity, past compositions and advances in technology. These help to push musical genres forward and constantly offer new ideas for aspiring artists looking for their sound. Every now and again, when a group truly discovers their sound, an album is released that changes the landscape of music. From 1994, Southernplayalisticadillacmuzik by OutKast is just that type of record. Released near the end of what is debatably the Golden Age of hip-hop, OutKast’s debut album introduced the world to southern hip-hop with its illustration of life for African-American youth facing the social, economic and racial inequities of post-Civil Rights Era Atlanta, its use of funk and live instrumentation and the rapping styles of Big Boi and Andre 3000.

In the late 80’s and early 90’s, rappers from the East and West Coast were the top dogs, each with their own unique style. The South was somewhat of an untapped resource of talent and experience that had the potential for great hip-hop. This is evident on Southernplayalisticadillacmuzik, as the record presents a different sound with its muggy, slow-cooked grooves on songs such as “Crumblin’ Erb, “Ain’t No Thang,” “Claimin’ True” and “Southernplayalisticadillacmuzik.” Add the flow and ingenious lyricism of Big Boi and Andre 3000 and you have an album twists and turns, creating the desire to dance, nod your head and reflect deeply on your circumstances.

These sensations come out because Southernplayalisticadillacmuzik is about the group’s lives in Atlanta, what they experienced on a daily basis and what they know. There is a lot of pride with regard to the city of Atlanta, the place they call home. They tell stories about drugs, prostitution, gun culture and male braggadocio. There is no attempt to glorify this. Instead, they offer up tracks such “Git Up, Git Out” which are about seizing the day. Additionally, there is an acute awareness to the generational pain of slavery and the repressive nature of the Jim Crow Era. For instance, on the interlude, “Welcome To Atlanta”, we hear a pilot explaining to the passengers, “To the far left, you can see the Georgia Dome, which by the way still flies a Confederate battle flag.” Ultimately with this album, OutKast doesn’t allow the pride of place to get in the way of reflecting on where they came from. Let’s not forget, they do this over tantalizingly smooth beats, piano riffs and the twang of the guitar.

With their debut album, OutKast offered up something different for the hip-hop community to take in. Southernplayalisticadillacmuzik has the funkiness and flavor of the South mixed in with the insightful lyricism of Big Boi and Andre 3000. This record put southern hip-hop on the map and paved the way for many aspiring hip-hop heads born below the Mason-Dixon line. If you’re looking for an old classic that you haven’t heard for a long time or for something you’ve never heard, put this on.