Tuning Into Some Turntablism 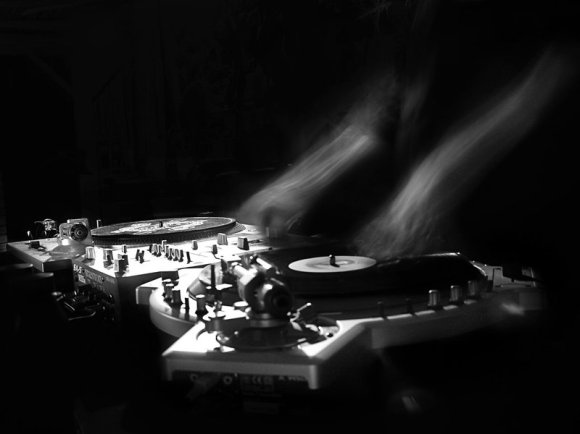 One of the many reasons why hip-hop culture is so appealing to me as a student is that of its depth. When some people think about hip-hop, they think purely about the musical aspect. They sometimes associate rap, or even more so, mainstream rap, with what hip-hop is all about. The fact is that hip-hop is so much more. Along with MCing, hip-hop also consists of the physical realm of breaking (b-boys/b-girls), the visual realm of graffiti art and the phonic realm of turntablism. And to me, turntablism may be the least talked about realm of hip-hop culture, when really, it shouldn’t be.

Turntablism in the simplest sense, is the manipulation and creation of music using turntables, mixers, needle drops and creative scratching. Along with creating original works through this style, turntablism also embraces hip-hop’s need for collaboration by associating itself with other artists such as MCs and producers to invent a whole new way to making songs.

Although the elements of turntablism surfaced well before the hip-hop breakout, it wasn’t until the late 70s where DJs and turntablists created the main instrumental element behind hip-hop music. Names like Grandmaster Flash and Kool DJ Herc are just a few of the big idols that helped push the element, and by taking breakbeats and creating their own sequences, these artists flourished with a brand where the sky was the limit.

From this, Grand Wizzard Theodore, the creator of “the scratch”, single-handedly invented the technique that turntablism is now. When exploring the reaches of vinyl on a record player, and how the vinyl sounded when manipulated under the stylus, Grand Wizzard introduced this and the needle drop to parties, which kick-started a revolution. The fundamental practice of turntablism soon blossomed into a respectable art form, and from choruses and hooks to individual party bangers, the 80s and 90s saw constant growth.

These days, turntablism is an essential hip-hop branch because of its history and identity as a true art form. By creating rhythm altering sounds and repetitive stabs, turntablism not only helped hip-hop grow in the 70s and 80s, but it also helped establish itself as a whole. By the manipulation of sound through interchanging records and scratching vinyl, turntablists have evolved into artists competing in competitions and tournaments. From record staples like Kid Koala to tournament champions such as DJ Qbert, hip-hop wouldn’t be hip-hop without the turntablism branch.

I was first introduced to DJ Qbert in middle school and was amazed by how quick he was behind the tables. His precision is witty, and his creativeness goes unmatched. Although DJ Revolution presents a dominating approach that’s both fast and rhythmic, Qbert overshadows him with imagination and style. As he invents whole new ways to utilize the crossfader, Qbert is the perfect example of the 90s turntablist pioneers.

A prime example of turntablism as the main focal point on a hip-hop track. This jam is pure hip-hop.

The Beat Junkies (sometimes referred to as The World Famous Beat Junkies) is a hip-hop crew of DJs that showcase their talents in turntablism. Organized by Stones Throw veteran J Rocc in 1992, The Beat Junkies have sold out shows and have thrown massive hip-hop spectacles for over 20 years. DJ Babu the legend (member of Dilated Peoples) is also a member of the group, and together these DJs put on a show. It’s amazing how their cohesion and style make it look so swift and clean, and this is a testament to the long-standing art of hip-hop collaboration.

I feel like J Rocc should have his own feature (he’s one of my favorite DJs). So cool, so calm and so collected, J Rocc makes everything smooth. Having worked with J Dilla and Madlib, J Rocc’s credentials are already well rested, but alone J Rocc is just as formidable. Just watch his artistry.

Kid Koala is the silent assassin. Most of the time, his artistry is so subtle it’s hard to recognize him, but as soon as it hits, you can’t get away. Working with hip-hop titans like Deltron 3030 and contributing to Gorillaz’ “Clint Eastwood” may be his lasting legacy, but his solo work is beautiful.

6 thoughts on “Tuning Into Some Turntablism”