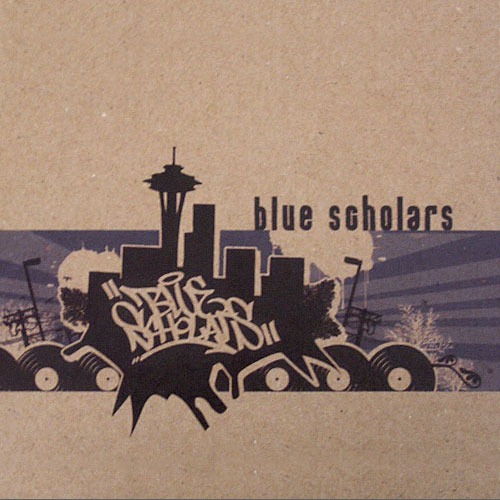 “Blue Scholars in the place to be, we got one DJ and one MC”

The song is called “Solstice: Reintroduction,” and it dangles with the magic of an 80’s Furious Five cut with lyrical verses that protrude like that of Gift of Gab’s velocity and flow. Hidden beneath are the lyrics, triumphant words that preach the truth and open the eyes before Blue Scholars hits the three minute mark (“Dr. King said ‘freedom at last’/ And some interpreted that to mean that we’ve come to the end of the path”).

This is, of course, expected from Blue Scholars, the hip-hop duo from Seattle, Washington with a name that plays off of the “blue collar” moniker. Passionately addressing topics like socioeconomic class struggle–often times referring to Seattle and the great Northwest–Blue Scholars digs deep into roots. MC Geologic uses his background as an activist in the Filipino American community to fuel his rhymes, and he touches on many politically labeled standards like racism within the Filipino community and neo-imperialism. On “Selfportrait,” Geologic writes from the view of “Shorty,” using his ideals against colonization and imperialism as a catalyst for his poems: “Shorty feels oppression on his shoulders as he’s lifting it/ Wonders why the elders always tell him not to question it/ Conjuring the courage just to conquer what’s been killing him/ He says it’s fucked up cause he knows no other synonym.”

A lot of what makes Geologic accessible as an MC is that he tackles the problems that persist specifically within a region that many people might not be familiar with–in this case it’s Seattle. Following past MCs and their focus on regional issues, Geologic helps us get to know his world on a relevant level. Attributing the ideals of Dead Prez to his philosophy and addressing enforcement issues that plague even a city like Seattle, “Inkwell” gets creative. “SPD’s spread the city like an STD,” he ushers. “I’m rollin’, rainier bumpin’, let’s get free. While the people sleep, I must speak ‘til they wake. Now let me push my pen to create.”

On one of the album’s greatest emotional tracks, “Burnt Offering,” Geologic struggles with the fact that he isn’t seeing any payment for his good ideals and consciousness through religion. He also harps on the dedication he has given his whole life: “I can’t wait but when it comes, shit/ It better be worth the shit that I paid most my life with.”

With some intelligent MCs and their strategic ways of tackling an important issue or topic, some of the language gets lost, almost metaphorically, as the artist struggles to link up rhymes and flow. With Geologic, you find none of that uneasiness. His attention to detail is as strong as his rhyme scheme, and combine that with a record without a breath out of step or a bar out of line, and you get wondrous work that’s politically, socially and mentally driven.

DJ Sabzi’s production is fitting, but more so complementary to Geologic’s stern subject matter. “Burnt Offering” hums with rattling, a flute breakdown and light guitar strumming to identify with the soul-capturing aspect of the song’s main points, “Blink” clatters with stuttering snare snaps that impersonate the tune of a military march while Geologic challenges America’s need for expansion and the album introduction “Solstice: Reintroduction” vitally brings the listener in as it vibes nonchalantly like a West Coast mellow funk groove. Likewise, “Blue School” captures the blue collar feel with an emphasis on being culturally central.

Blue Scholars are pioneers for hip-hop because their music and poetry attack what we are normally told to ignore (neo-imperialism, social class struggle, youth empowerment). “Oh there’s nothing you can do about it,” people will say. Well, Blue Scholars are here to tell us that ignoring it is part of the problem. On their self-titled debut album they sit us down and amplify these themes into a record worth listening to and studying.

Between Richard Sherman and the impending Super Bowl this weekend, it would be accurate to say that the city of Seattle has been in the news as of late. If you dig a little beneath the surface, the city has also been in the news for much more important reasons. A few weeks back, socialist Kshama Sawant was sworn in to the Seattle City Council. This is an unprecedented political victory but not surprising if you take a look at the some of the politically driven hip-hop coming out of the Pacific Northwest.

Formed in the early 2000’s, the Blue Scholars are a Seattle based hip-hop duo consisting of producer Sabzi and MC Geologic. Their debut record, Blue Scholars, is one of those gems that incorporates swanky jazz production with hard-hitting political ideology grounded in socialism and social justice in such a way that is accessible and enjoyable. With Geologic’s straight-forward lyricism there is no attempt to deceive the listener as to where this group is coming from or what they are about. The second cut off of the album, “Blue School,” serves as a manifesto of sorts as Geologic lays out the group’s ideological and political stance. “I’m all about a government that citizens dictate/ Sick of fuckin’ dealin’ with the president’s mistakes.”

The charm of this album is that it is politically driven but still makes room for a softer, more reflective side. In short, Geologic and Sabzi are able to step back and reflect. One of the highlights of these more vulnerable moments is on “Burnt Offering” as Geologic ponders the meaning of organized religion. In this case, Christianity. “Sometimes they be thinking that this heaven’s for sale/ Worse than that, they still think God is male/ Moms used to hang up pictures of white Jesus, fist clutching rosary beads over the years/ I began to question this father almighty/ Made in his image but don’t look nothing like me.” While this track may move with a slower pace, the intensity and thought of Geologic’s rhymes remain constant.

Blue Scholars is one of those perfect examples of how it is possible to fuse music with politics, community action and self-determination. On top of that, there is also space to think about self and what it might mean in the context of childhood, history and belonging to an organized religion. Geologic and Sabzi have created an album that could be used to talk about these issues with youth and adults alike. Even from an initial listen, there record is relatable in such a way that it breaks through any sort of perceived boundary that may exist.

When I become teacher, I will use this record.