Album of the Week: “In The Ruff” by Diamond District 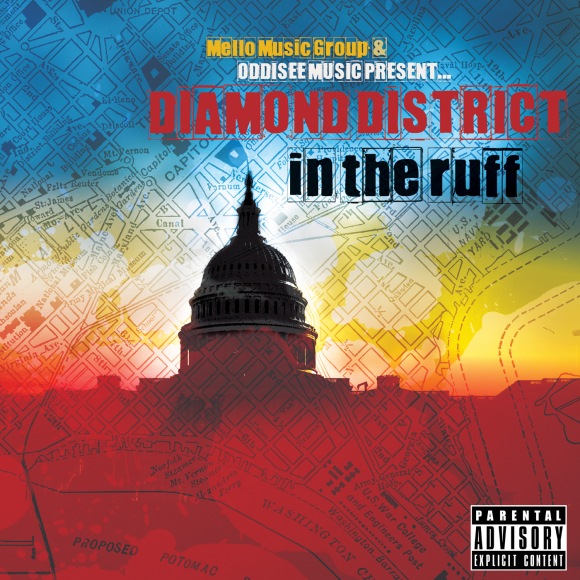 As far as I’m concerned, some of the best hip-hop tracks around involve multiple MCs spitting over a forceful, grimey beat. Don’t get me wrong, I love when a rapper is able to take over an entire song and do their thing. However, there is something special about a quality posse cut. There is more space for different styles and lyrical content as each MC can demonstrate their individual talents while simultaneously adding to the overall quality of the group. Released in 2009, In The Ruff by Diamond District is a record that bangs in this type of way from start to finish.

Hailing from Washington D.C., Diamond District is made up of Oddisee, yU and Uptown XO. If you’re familiar with only one or all three of these artists’ individual work and haven’t heard this record, you need to get on that. As one would expect, Oddisee expertly provides his customary boom-bap infused production with which all three of them are able to demonstrate their lyrical prowess and approach to rhyming in their own way. This is not the production of Oddisee from The Beauty In All/Tangible Dream or Rock Creek Park. The musical backdrop is rough around the edges, making them, in my opinion, bounce with even more force. It’s what you want from a record that is modeled after classic cuts from the 90s; raw and uncut.

Adding to this are the rhymes delivered by Oddisee, yU and Uptown XO, packed with intellect and purpose. On “Streets Won’t Let Me Chill,” yU raps about his motivation, religion and fatherhood: “Now constantly around my way/ Niggas is wild, the reason why daily I pray/ For me to not get taken off the path, all I have is my mission and my daughter, namsayin?” XO uses his moment on “The District” to speak about resistance and the violence of his city and the irony of being so close to the White House: “The builders of America don’t care about my life today/ Niggas goin’ to jail/ Learn to live the righteous way/ The only reason why Malcolm ain’t alive today, only reason why my fist in the sky today/ A true chocolate city nigga was the murder capital with the White House in the center.” Over a much looser beat such as “Something For Y’all” one might assume that this is where they’re going to go in and boast about how amazing they are at rapping, hitting on women, getting money or whatever else some people rap about these days. This could not be further from the truth as Oddisee describes his work ethic and what its taken to be successful: “The hardest workin’ man to the hip-hop fans cause my demand is determined by ethic/ And I’m on the board and I’m on the boards and I’m on the mic and I’m on the tour/ So what you expectin?/ They keep re-electin’ me to carry the torch cause the way I run up the steps.” What becomes clear when listening to this record is that Oddisee, yU and Uptown XO work hard at their craft and don’t have time for dumb rhymes or wack beats.

Music has the power to create moments of collaboration, making the finished product that much better. This is because every individual musician is able to contribute their personal style and bounce it off the other members of the group. In hip-hop music this typically manifests itself with multiple MCs appearing together on the same track or album. Taking into account the individual success of Oddisee, yU and XO, In The Ruff shows that they were each ready to put forth the effort to get better and achieve their individual and collective goals.