Album of the Week: “…one rifle per family” by Bambu 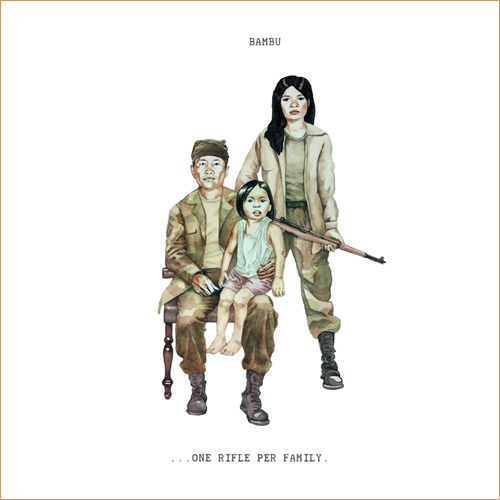 There is a lot of conscious hip-hop out there. It may not necessarily be a part of the mainstream but it does exist. It’s a matter of whether or not you want to find it and take the time to do so. Conscious hip-hop is made by artists that have a deep knowledge and understanding of history that comes from a place of liberation and can be used to spark conversations about empowerment, community, politics and education. Through their music, artists such as Immortal Technique and Dead Prez take this to the next level.

Out of the Watts neighborhood in Los Angeles, Bambu is on this same platform, with his 2012 album …One Rifle Per Family being a musical manifesto that is revolutionary, beautiful, forces an investigation of the historical relationship between the United States and the Philippines and demonstrates the way to lead a holistic life.

The first thing that needs to be said about …One Rifle Per Family is that threis shit bangs. The difference of the beats from one track to the next will keep you guessing as to what Bambu’s sound even is. There are those swagged up bangers such as “Rent Money” as well as “Pops” that has more of a jazzy influence with hard-hitting horn stabs and pulsating sixteenth note hi-hats. Every beat varies, keeping the sound fresh and tough to define, making it difficult to feel that any song is repetitive to the point of nasium.

The other thing that needs to be said about this record is that Bambu is an amazing MC. Of Filipino descent, Bambu comes from Watts. Given the historical context of Watts, his own experiences growing up in this Los Angeles neighborhood and razor sharp lyricism, Bambu addresses issues such as colonization, fatherhood, self-defense, the objectification of women in the media, police brutality and the importance of reading and gaining knowledge from sources other than the public school system. Bambu reveals a Watts community that is vibrant and full of good people, much different than popular narratives of Los Angeles communities of lower socioeconomic status.

One of the best parts of hip-hop culture is that it is liberatory, manifesting itself in multiple ways and through more than one art form. This is because it can be adjusted to fit with all kinds of cultures and experiences. Over the past five years, Bambu’s …One Rifle Per Family is a prime example of this. This record bumps without letting up and it moves with a revolutionary spirit that is unfortunately hard to come by. In part, this is because of the production. However, Bambu is the driving force behind this particular energy. Not only is …One Rifle Per Family politically radical in nature, it is also scholarly and about love. I’m not sure if you could want anything else from a hip-hop record.