A Bonus Cut Feature: An Interview With Nique Love Rhodes 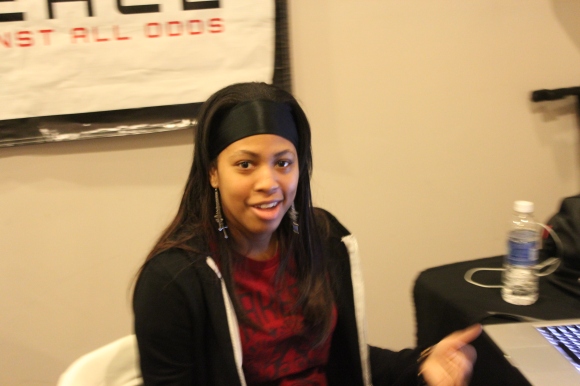 About three weeks ago, Dan and I attended the ULITT hip-hop conference at Michigan State University. In its third year, the ULITT conference presents a unique opportunity to learn, collaborate and network with artists, educators and community activists that incorporate hip-hop in their work. We met Nique Love Rhodes after a session hosted by Sacramento Knoxx. She came right up to us, introduced herself and handed us each CD’s of Against All Odds, her album from 2012.

As an independent artist from Detroit, Nique is also a part of the Foundation, a women’s hip-hop collective that operates out of the 5e Gallery. For the interview I drove down to the Beehive, a for-rent rehearsal space for artists in the Detroit area. The rehearsal studio has a drum set, sound board, speakers and enough room to practice with her band. Along the walls are pictures of inspirational figures such as Lauryn Hill, Angela Davis, Malcolm X, Lupe Fiasco, Queen Latifah and Martin Luther King. From the second I walked into the room, it was clear that she has an understanding of African-American history, womanhood, hip-hop and how those things play out in everyday life, something she attributes to her mother and education.

A picture of Angela Davis at the Beehive. Photo by: Gus Navarro

“It definitely came from my mom,” says Nique. “My mom always had me watching the news and kind of schooling me. You have to be an agent of change in our society, especially as an African American. That’s part of your history. I really didn’t put two and two together until I went away to college. I went to a Christian school called Spring Arbor University and studied urban ministry. I always had a spiritual side of me, I was raised in the Church and things like that. When I got to school my major was primarily sociology, philosophy and theology. It wasn’t until then when I started taking some of those classes that I put it together that as a human being, as a person created by god, it’s my responsibility to be a part of social change and social justice in the world.”

Her music reflects these concepts with multi-layered lyricism that examines themes such as political consciousness, love, pain and resiliency. Included in all of this is the fact that she tries to bring a feminine perspective to hip-hop, which raises the question of how she views her place within hip-hop and the term female MC.

“I’m also proud to be a female MC and hold my own with the guys. I’ve done shows where I was the only female on the bill and rocked it. I kinda stole the show from people and I think that’s really cool to be able to represent women and show that you don’t have to be hyper-sexed as a female MC.”

The Beehive. Photo by: Gus Navarro

As an artist, community organizer and native of Detroit, Nique has seen many different sides to the city. There is bad, there is good and now a changing landscape as companies are investing in the city and younger professionals are moving in. However, what hasn’t changed is the existence of important grassroots organizations that have already been in Detroit and have been serving the various communities in the city, something that Nique spoke about with me.

“I think right now Detroit is in a very interesting place. Coming back it’s like this new renaissance and there’s a lot of innovation happening in the city with people whether its starting small businesses, people coming back and making big movements within the arts and you have the urban gardening that’s happening now. All of those things are awesome. On the flip side of that, you have this huge movement of gentrification that’s coming into the city and that’s displacing a lot of people who have been doing great work in the city. Now those people still can’t get funding for their businesses because all of the funding is going to Ivy league tech start up companies that are coming here.”

As Detroit continues to make headlines, both positive and negative, it is crucial that we build with community members that have been living and working in the city for generations. If you look at history, Detroit’s economic downturn is old news and with that, so are the grassroots community organizations that have been making a difference for people for years. Hip-hop has a place in this as many of the areas most respected artists are heavily involved in this work. Nique Love Rhodes is one of these artists and we are honored that she reached out to us and that we were able to do an interview.