Album of the Week: “Fantastic, Vol. 2” by Slum Village 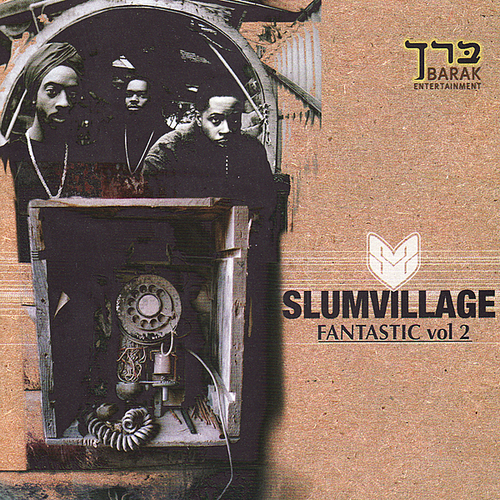 Slum Village has been around for nearly twenty years, and as a constant staple not only in Detroit (where they’re from), but also around the country, it feels weird to look at Slum Village from a certain standpoint at times. Their lineup for one, has been marked with blocks–or even more fittingly, eras. There was the early era, marked with original Slum Village members Baatin, Jay Dee and T3 meeting while attending Detroit Pershing High School. As it went, they steadily became an underground hip-hop force in Detroit. By 2001, Jay Dee changed his name to J Dilla and left to concentrate on his solo work, leaving the group to Baatin. Bringing in Elzhi as Dilla’s replacement, Slum Village’s time in the Baatin Era was cut short in 2002 due to various health problems (Baatin passed away on July 31, 2009), and while in the hospital, he was kicked out. By 2003, Slum Village entered the Elzhi era, and for four records up to 2010, this was the rotation and the longest running era of the group. In July 2010, Elzhi made his move and left, choosing to chase his solo career, and at this point the Slum Village lineup featured Illa J (J Dilla’s younger brother), T3 and Young RJ (with T3 acting as the lone representation of the original lineup).

So as you can see, the Slum Village lineup history is crazy, confusing and far from cautious. Yet, after all of the turmoil and inner-group confrontations, T3 has continued to keep the Slum Village name relative and influential.

The original trio of Baatin, Dilla and T3 are responsible for Slum Village’s best record. Although not the best commercially, Fantastic Vol. 2 is fundamentally the grandest. Constructed as a hybrid A Tribe Called Quest record, Fantastic Vol. 2 controls the listener with mystifying production from J Dilla, and tone-downed lyrics that are fun, loving, nonchalant and battling.

The production itself is solid like any Dilla beat, but here he focuses on incorporating different funk influences under a clean and crisp percussion arrangement. “I Don’t Know” is light and airy, with echoing funk organ swells and ringing claps; “Get Dis Money” trods with stabbing synth riffs, rifling through the song as its main component; and “Raise It Up” sounds rough around the edges, with a video game-like synth and percussion drive, but comes off incredibly clear. With Fantastic Vol. 2 we hear Dilla like he was in 2000, taking similar style to A Tribe Called Quest and De La Soul and adding his own arrangement and sound.

Lyrically, Fantastic Vol. 2 sort of steps down and calms the content. A lot of the record involves Slum Village touting their style, or touting their badassery, and this isn’t a bad thing, until you find yourself at the end of the record looking for more. But interladen between this content is startling truth, which makes Fantastic Vol. 2 a considerable gem. “Once Upon a Time,” which features Pete Rock, is filled with nostalgia and witty wordplay (“Doin this for DET in the place to be/ Can’t forget the rest R, O, I and T”). Elsewhere, “I Don’t Know Why” switches verses between all three members and is incredibly simple yet relatable: “I don’t know why the fuck I’m fucking with you.”

Fantastic Vol. 2 isn’t a new concept, especially in the year 2000, but that doesn’t mean it isn’t appealing and important. Taking vibrant sounds and styles from acts before them such as Common, De La Soul and A Tribe Called Quest, Slum Village makes us all nostalgic for some classic funk-fueled hip-hop sound. Dilla’s production is especially appealing, with crisp snare claps, funk synths and organs, experimental tracking and clean mixing. Lyrically, Slum Village tones it down and celebrates life, love and their style, and together this makes a fantastic record worthy of all accolades.