Album of the Week: “Train of Thought” by Reflection Eternal 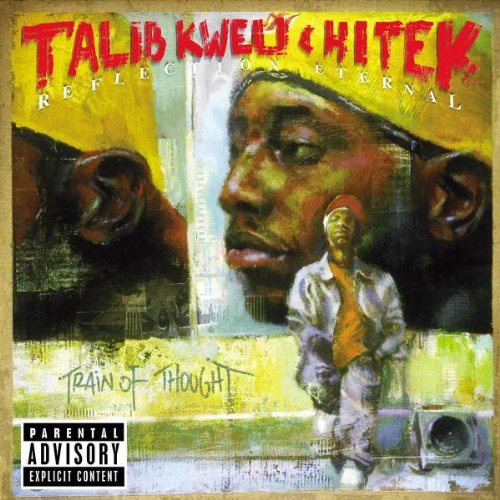 One of the most unique sounding hip-hop records of the 21st century is Reflection Eternal’s Train of Thought. It’s an album that swirls neo soul waves with poignant wax instrumentation while maintaining a stance through the duo’s two contemporary heroes: Hi-Tek and Talib Kweli. Combing over slippery underground beats, Hi-Tek makes it well known throughout this record that his skill and creative mind behind mixing traditional breakbeats with Soulquarian-like moods is something he’s mastered for a long time. “Too Late” finds itself filled with different instruments, rattling, echoes and sounds that prance around the track like anxious ants, and underneath stands the bass, acting as the queen as it slowly trudges like an early Dilla cut. “This Means You” is more formal in nature, introducing itself with a twangy electric guitar funk riff and intersecting strings that keep the instrumentation “tight raw.” As with “Too Late” and “This Means You,” along with a good chunk of songs here, Hi-Tek shows variation, but also establishes a distinct approach. On most cuts you’ll find yourself vibing to high-tempo explosions while at the same time admiring the stuttering bass slugs and mix of worldly instruments. Lyrically, the album is a deep-thinking novelization in record form. As with any Kweli project, Reflection Eternal continues to throw around socially conscious thoughts and resistance stanzas on the hip-hop barbeque. Out of Kweli’s biggest projects–let’s think of Black Star and his solo album Quality specifically–Train of Thought has a clear-cut right to claim it has Kweli’s most poetic and conscious material in his ever-expanding discography. On the funk-driven “Soul Rebels,” which features De La Soul, Kweli talks about the hip-hop conscious and his ideals (“I lace the flow on purpose even up the ratio/ Of hip-hop to that shit they drop on the radio“). Later on he states: “They hate it, cuz they know if they don’t get it, then they may be slow/ We still gonna blow like the horn played by Horatio.” “Move Somethin’,” the fast-paced early banger on Train of Thought, instructs us all on Kweli’s stance on the hip-hop whole (“Kill all the yapping let’s make it happen/ You cats ain’t real, you just a re-enactment“); “Ghetto Afterlife” attacks American politics, oppression and colonialism (“These niggas ain’t thugs, the real thugs is the government/ Don’t matter if you independent, Democrat or Republican“); and “Name of the Game” seems to flow–both musically and lyrically–as a continuation of Yasiin Bey’s verse on Black Star’s “Thieves in the Night,” as Kweli talks about survival, the American reality and how to survive (“Persistence, dedication, consistent motivation, resistance to stagnation“). On Train of Thought, Kweli’s lyrical flow and conscious swells are strong, as he covers love, romance, governmental oppression, survival, America’s social and political constructs and the everyday ordeals of this world. Matched with Hi-Tek’s free-range production that explodes and immerses the listener in a whole realm of sound, Kweli’s lyrics match perfectly, and together they make Train of Thought one of the most outreaching records of this new century.

Talib Kweli and DJ Hi-Tek are Reflection Eternal. Few things are more hip-hop than an MC and a DJ teaming up together for an entire album, creating music that is fluid and that people can connect with. Their debut album, Train of Thought, is one of these albums. Released in 2000, this underground classic resonates with the precision of Hi-Tek’s production and the sharp social and political realness of Kweli’s raps. The power of art is that when done right, it has the power to educate and to encourage people to think about things in a way that they potentially hadn’t before. In the case of Train f Thought, this is a record that stands the test of time because of the way Hi-Tek and Kweli were able to create music that is fresh and that can ultimately teach us about life and how to live.

Over Hi-Tek’s crispy snare, blaring horns and timpani-like drums of “Move Somethin’,” Kweli is in your face, proclaiming his greatness as an MC. At the same time, he is also challenging mainstream rappers that are overly concerned with what sells and who are essentially faking the funk. In the hook he proclaims:

“Kill all the yapping lets make it happen/ You cats ain’t real, you just a re-enactment/ Better yet, dramatization/ Soon as the director say action you start fakin’/ I start breakin’/ The whole joint start shakin’/ This ain’t the time or place for you to prove something/ Cut the stargazin’ yo, move somethin’!”

Given the current manifestations of pop-culture rap, these words could not ring any truer. Kweli is talking to hip-hop artists but he is also talking to us, the people, to be about something of purpose that is good for your community.

Further along the tracklist is “Africa Dream,” which slides in with ease using hand drums, a heavy piano riff, sleepy trumpet notes and the distant sound of the ocean lapping on the beach to set the scene. The image that comes to my mind is of the west African shoreline at sundown, the skyline is ablaze with the brilliance of the blood orange sun setting into the purple waves. This feeling quickly intensifies as the drums continue, picking up the pace. Then Kweli comes in: “If you can talk, you can sing. If you can walk, you can dance.” He repeats this and then fades into the distance as the drums continue to pound and the horn keeps it coming. Then everything changes.

The beat that Tek lays down thumps with precision and rings with a persistent, high energy hi-hat that sounds like the precursor the every beat you hear nowadays with hi-hat rolls. Talib enters again, tearing it up about history, slavery, black oppression, wack rappers, materialism and also reclamation all in one song. The song fades as Kweli says, “Yo, we the reflection of our ancestors/ We’d like to thank you for the building blocks you left us/ Cause your spirit possessed us/ Yo, you blessed us/ Thank you very much.” This song reflects how we should live. We need to know about our past to better understand our present and future (hence the drums). Additionally, we don’t have time for pointless materialism and valuing superficial products. On top of all of that, we have to pay respect to those that came before us.

In the end, it is difficult to cover everything about Train of Thought because there is so much to this record. There is truly not a bad song on it and it is a work that is complete from start to finish. If you want a sense of the transformation occurring at the turn of the century, put on Reflection Eternal’s Train of Thought and let it bump. It has the fresh beats that remain fresh to this day thanks to the brilliance of Hi-Tek. It has guest appearances ranging from Dave Chappelle, Yasiin Bey, De La Soul, Rah Diggah and Kool G Rap to keep things interesting and at times, funny. It also has the multi-dimensional skills of Talib Kweli, showing us why he is one of the greats that you may have never heard of. At one point, he encourages us to love with “Love Language.” There is also the socially conscious observations of his environment on tracks such as “Some Kind of Wonderful.” And if you need him to, Kweli will come with something like “Down for the Count” where he will just go off. Ultimately, Kweli’s versatility reflects how to live a multi-faceted lifestyle. There has to be love, a level of consciousness that allows you to make informed decisions and at times, aggression. This record isn’t about being superficial or being a studio gangster. Instead, Train of Thought is a celebration of life that will continue to be relevant because of what it hast to say about living.