Mass Murder America: Introspection on a Culture of Violence 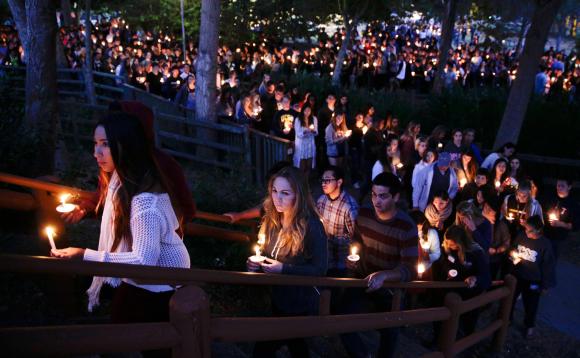 I’m sure you all have heard: on May 23, 2014, 22-year-old Elliot Rodger killed seven people, including himself, and injured thirteen more. The attacks occurred near the campus of University of California Santa Barbara, and resulted in four different crime scenes. He began by stabbing his male roommates, shooting three women outside a sorority, then preceded to drive around town, firing at random pedestrians. Rodger’s motives were clearly articulated in his now widely circulated manifesto, My Twisted World: The Story of Elliot Rodger. This manifesto documents his history of disturbed thinking, on matters such as sex, women, identity, money, power and self-worth, and reads as a chilling narrative of our deeply disturbed culture.

Misogyny plays a large role in Rodger’s disturbed worldview; this killing spree is an extreme manifestation of what happens daily to women in America. Violence against women is not a myth. Violence against women is not part of some “liberal agenda.” Violence against women is something we can no longer ignore—it is a reality faced by over half this country’s population that is leading to the degradation of our culture. We can no longer live in a world where our mothers, sisters, and daughters walk the street, plagued with fear, unsure if danger lurks around the corner. Women are the givers of life and should be respected accordingly, not reduced to oversexualized images of flesh that men are “entitled” to.

Reading through My Twisted World, it’s obvious Rodger felt entitled to female bodies, especially if it involved anything sexual in nature. The self-described “kissless virgin” felt he deserved the “adoration” of females, that women owed him sex, respect and their unwavering obedience—and any denial of such entitlements gave credence to his frustrations and rage, which were further reinforced in the culture we live in:

Rodger’s violent “retribution” is not the first of its kind. Massacres against women, and unsuspecting males, have been a trend in American society, especially in the past twenty years. Just a few years back, George Sodini, a 48-year-old man, shot 13 women in a gym, killing three. His motives: revenge against all females who refused him sexually and emotionally. Clearly, our country perpetuates the idea that women must be subservient to men, and that any disruption of this status quo must result in violence.

But misogyny alone cannot explain these massacres—the thread runs much deeper into the heart of American culture: a culture of extreme violence and bigotry. No other nation in the developed world deals with as much internal violence. Last year, America averaged 365 mass shootings where fewer than 4 people were killed. That’s one mass shooting a day. And we call ourselves civilized? On top of that, nearly half of all mass murders around the globe occur within the United States. In the past seven years, the FBI has identified 186 mass killings, resulting in over 900 deaths. This isn’t normal. This isn’t just “the way things are.” This isn’t the way a society should function. We can no longer blind ourselves to the reality of our deadly culture.

Hollywood, the media, prisons for profit, and our glorification of war create an environment where violence is normalized. These industries reduce human beings to mere images on a screen, creating a false, simplistic, overly-generalized depiction of reality, which many citizens fall victim too. They become absorbed in the fantasy, often desiring the same sensational experiences in their own life, and in turn, further remove themselves from the real world. This can be seen in Rodger’s view of his own life—he desired the sex, the money, and good times often seen in Hollywood blockbusters. As a society, we live too much in our heads and not enough in our bodies. We accept the dehumanizing worldview projected by these industries, embodying our own oppression, and allow such representations to dictate our behavior and discourse.

But in times like these, it is important to stand up and speak your truth. Despite the bloodshed, our culture is engaged in necessary conversations about the well-being of our collective future. We can no longer live in a society where such preventable violence is accepted, normalized, and even encouraged. If we cannot reverse the dehumanization that runs rampant in America, we will continue on this trend of misogyny and mass murder.

As Hadley Freeman writes, “Rodger was enabled in his misogynistic feelings by a culture that exists to validate the feelings of angry, lonely and sometimes mentally unwell men.” One cannot completely blame Rodger for his actions. Yes, he was a misogynist. Yes, he killed seven people in a haze of delusion. But we must understand and recognize, Rodger, and those like him, are products of their environment. Violence is bred into us. We must remember: without validation from society, these dangerous ideologies cannot exist.