Pushing the Tracks: “Beefed Out” by Sacramento Knoxx 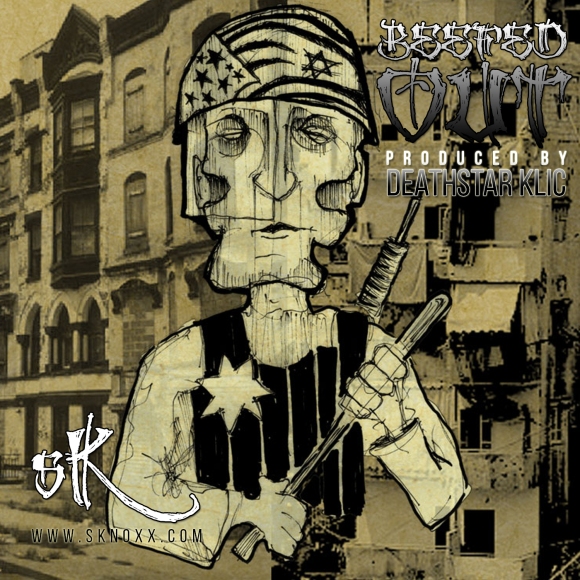 If you follow this publication at all, you’re more than likely familiar with the work of producer/MC Sacramento Knoxx. Born and raised in Detroit, Knoxx incorporates hip-hop into his work as a community organizer and activist. For the last three months Knoxx spent time in Oakland and San Francisco, California as an artist in residence at the School of Unity and Liberation and the Arab Organizing & Resource Center.  As violence between Israel and Palestine intensified this summer, Knoxx’s work to address anti-arab racism, speaking out about the injustices of the Israeli Apartheid and teaching youth from a social justice lens became even more crucial .

Today we feature “Beefed Out,” from the recently released The Trees Will Grow Again, the culmination of Knoxx’s summer in California. As he explains:

“Beefed Out” speaks to the increased militarization of U.S. police in our communities. We call on our communities to continue fighting back and resisting state violence and repression. Understanding prisons, borders, surveillance and policing as tools of global repression is critical to building and maintaining powerful movements for liberation.”

Behind the heavy and frantic war drums of DeathStar Kic’s Dustin Haffner, Knoxx successfully sums up the plight of the hood at home and abroad. He does this with lines such as, “Feeling like I’m facing King Koopa/ They quick to shoot ya/ That violence, repression, that new old message” and “De-fund activities with the police/ War on terror, war on drugs, border security/ R U phvckin kiddin me?/ This is the land of the free.”

The entire The Trees Will Grow Again project is another reminder of how hip-hop can be to unite people and raise consciousness when used to speak on the social, political and economic platform. As events continue to unfold in the United States, the Middle East and around the globe, our hearts and minds are with those continuing to do battle against oppression.

More information, the link to the song and instrumentals, are here: http://sknoxx.bandcamp.com/track/beefed-out

This was produced along side fellow DeathStar Klic producer, Dustin Haffner. www.soundcloud.com/dhaffner

One thought on “Pushing the Tracks: “Beefed Out” by Sacramento Knoxx”