The Bump in the Night Beat Battle Recap 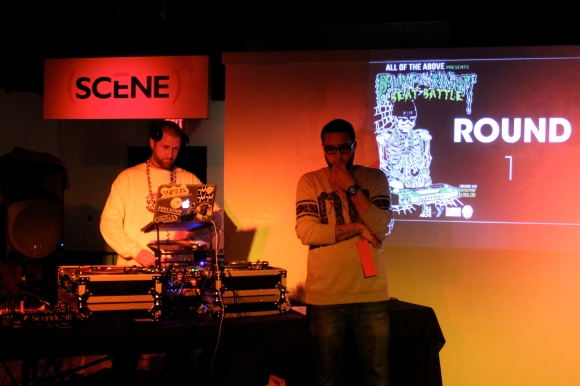 Hip-hop is a multi-faceted art form that can be difficult to categorize, and in my opinion, even more difficult to define. That being said, one thing that remains constant within the musical side of things is the presence of drums. In providing the tempo and rhythmic base for MCs to rap over, the beat has always been a key ingredient to hip-hop music. Hosted by the Lansing based hip-hop collective, All of the Above (AOTA), the Bump in the Night Beat Battle was a night full of on-point beats that made people holler and nod their heads in appreciation. Showcasing some of the best beat-making talent mid-Michigan has to offer, Bump in the Night brought old and new friends together, creating chances for fellow musicians to build with each other.

“It’s helping to get the creative juices flowing in Lansing,” said AOTA co-creator, Sareem Poems. “There’s artists here who don’t know about each other, and they’re getting a chance to meet and build possible collab opportunities. For us, it means the most to see this community come together and continue to build the hip-hop scene here in Lansing that people seem to forget about very easily.”

Consisting of four rounds, producers went head-to-head, each playing three beats for the crowd. Seated at the edge of the stage, four Judges, Seoul of the 61Syx Teknique B-boy crew, Matt Foust of 808 Ministries, KuriOto of the BLAT! Pack and Lansing legend, DJ Butcher, decided who moved on to the next round. These events can be difficult for judges because much of it is open to interpretation. During a pause in the competition, Seoul broke down the intricacies of judging a beat battle.

“All four judges are looking for something different. Each judge is looking for a certain thing in the beat so it changes things when it comes to judging. I’m looking for creativity and flavor,” he explained.“It’s a little bit different because my flavor isn’t going to be the same as somebody else’s flavor. So you gotta look at what appeals to everybody while also thinking about what catches your ear.” 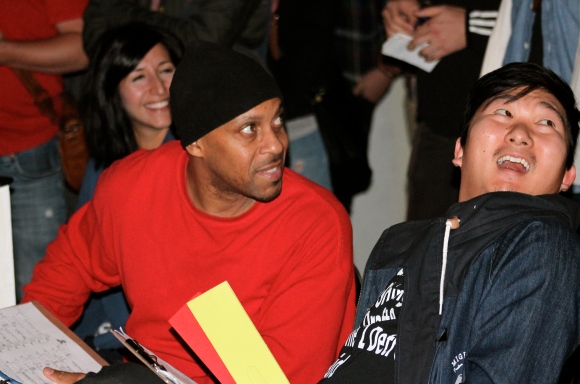 Nowadays, technology allows even the most average Joe the ability to make a beat. Anybody can press a button that sounds like a hand clap or kick drum, but that doesn’t make them a producer. A producer is someone who, with their percussive composition, is able to create energy and feeling from people who listen. Their beats make MCs want to rhyme and cause people to throw their hands to the sky.

Outersound Music Group producer, Young Heat, a previous beat battle champion and competitor, addressed his favorite part of being a part of beat battles: the people. “The people determine everything. We can have judges but if the crowd doesn’t like it, the judges won’t even matter.”

Young Heat may have been crowned victorious previously, but the night belonged to AOTA producer Ess Be. He climbed through the first two rounds, each of his beats seeming to get more sophisticated as the night went on. In a tense final round between Ess Be and The Sound Addict, another AOTA producer and past winner, Ess Be brought out all the stops, dropping trap beats and sampling Michael Jackson’s “Thriller” and the Ghost Buster theme. Every producer brought it, but Ess Be seemed to have a little more heat on this particular night and it was clear that he’s been hard at work.

Being in the crowd for this event was so much fun. With each beat drop, you could feel the positive energy and passion from the crowd as they erupted in cheers, always wanting more hi-hat sizzles and crispy snare hits. Behind a backdrop of pulse-pounding beats, I got to catch up with people I haven’t seen in awhile and just be around a community of people that have welcomed me and have shown me nothing but love and respect. Between each round, an MC performed as well, giving everyone a chance to vibe to some lyrics and take a break from the competition. First up was AOTA student, Evan, followed by Miles Young of Outersound Music Group and finally, Sareem Poems. DJ Choppy Blades was on hand, spinning the beats for each contestant and Ozay Moore, the creator of AOTA, kept things moving between rounds, MCing the event to perfection. There is no doubt that the Bump in the Night Beat Battle was a successful event. On a mild October night, beats were dropped and the crowd erupted with joy. It was a celebration of hip-hop and a reminder of all the good it has to offer in Lansing, and communities all over the world.