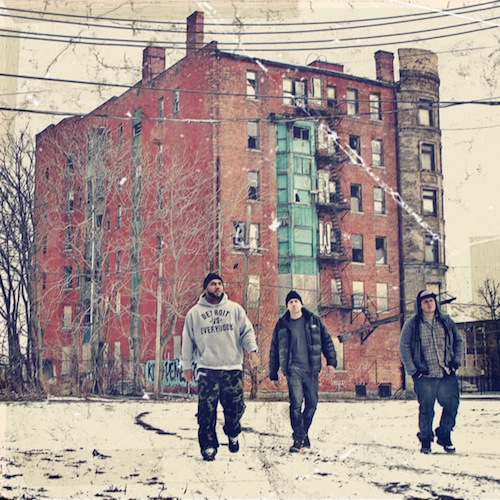 One of the gripping realities about life is that it’s cruel and unfair no matter what kind of character life’s thundering blow is hammering on. For the blue-collar everyday man living paycheck to paycheck and facing the constant realities of life, Ugly Heroes deserve to be the representatives. On their debut self-titled album, Red Pill and Verbal Kent waste no time laying down a verbal guide to life’s cyclical nature through their eyes, while Apollo Brown provides luminous beats forged from masterful sampling and bombarding percussion tones. The real catch of Ugly Heroes is the cohesion that Brown provides to Red and Verbal’s bars, and as their inflexible lines of life hit, Brown’s vivid craft supplements this perfectly to create an album that is both enduring and influential.

Red Pill and Verbal Kent are straightforward from the very opening cut to the fading outro of “Push,” and by putting everything on the table they’ve provided a contextual album that neither feels like a gimmick or glossy with tricky wordplay. The plodding rhythm of “Long Drive Home” discusses insecurities, anxiety and overall stress while “Desperate” features the two MCs detailing the harsh realities of their hometowns and compounding circumstance (“Shattering that tax bracket you sick of us” / “Bills piling up so I don’t see you smiling much”). Elsewhere, Ugly Heroes track the idea of people living paycheck to paycheck until the end of their days (“Graves”), the importance of holding onto relationships and friendships in dwindling conditions (“Hold On”) and the notion that if you don’t live in the present and appreciate some of the smaller things then everything will burden you (“Just Relax”).

From an outsider’s standpoint, Ugly Heroes is a concept album that covers everything from class structure to human emotion, but once you delve into the record it becomes apparent that it’s an anthem for hip-hop as a whole. Though most of the record is negative and downtrodden in content, songs like “Just Relax” and “Push” gives Ugly Heroes a light of confidence that only strengthens it as a whole. Red Pill and Verbal Kent are sincere and bold throughout, and Apollo Brown’s lush sample-heavy production provides the two MCs a beat to march to. Even with all of the hype surrounding this project, Ugly Heroes exceeded expectations in almost every category.

After listening to Ugly Heroes (via Mello Music Group), it is clear that this album could not have been released at a better time. With production from Apollo Brown and profound rhymes from Red Pill and Verbal Kent, the three of these underrated hip-hop artists use the art as a means of storytelling and addressing the real plight of the everyman and the blue collar worker; the ugly hero. This is the person who lives paycheck to paycheck, trying to make ends meet; this is the person whose social class renders them a victim of the “War on Drugs,” the prison-industrial complex, low-income jobs and gentrification.

This is why Ugly Heroes is such an insightful album. Red Pill and Verbal Kent are using their lyrics to speak on their everyday experiences. For example, both MCs touch on substance abuse, poverty and class struggle. This is especially clear in songs such as “Desperate,” “Graves,” “God’s Day Off” and “Hero’s Theme.” In “Desperate,” Apollo Brown utilizes forebodingly soulful samples as Red Pill posits, “While these motherfuckers pop bottles / I’m takin pop bottles back into the store so I can get some Top Ramen / What the fuck they know about that rock bottom.” And in “Graves” Red Pill raps about working a low paying job, “Between the hard drinking / And the smoking, start thinking/ ‘Bout the folks who gotta do this to they graves / You can’t afford to walk up off the job / Cause you gotta get your money and your money is your god.”  With songs such as these, they articulate the lives of people that are swept under the rug.

While Red Pill and Verbal Kent are from Detroit and Chicago respectively, their words reach to people beyond these two cities. With their words, Kent and Pill are able to take the audience to an extremely reflective place. Their words however, would have less significance without the brilliance of Apollo Brown. Originally from Grand Rapids, Apollo Brown is able to push the listener into a thoughtful disposition before the words even begin. Using numerous horn, piano and R&B samples he is able to create an atmosphere of contemplation with his slow and deliberate beats that always hit hard and perfectly accompany the MC(s) he is working alongside.

With hard-hitting, honest lyricism and purposeful beat-making, Ugly Heroes takes us to a place far beyond the intense, sensational news found on T.V., the Internet and social media. Instead, they take us to the street corners, parking lots and homes where good people wake up everyday trying to survive and stay above water. On Ugly Heroes, Apollo Brown, Red Pill and Verbal Kent create a tone of reflection that allows us to question popular culture, consider our values and think about what a Hero even is.

Stay tuned next week for a Bonus Cut exclusive interview with Red Pill!