A Bonus Cut Feature: An Interview With Journalist 103 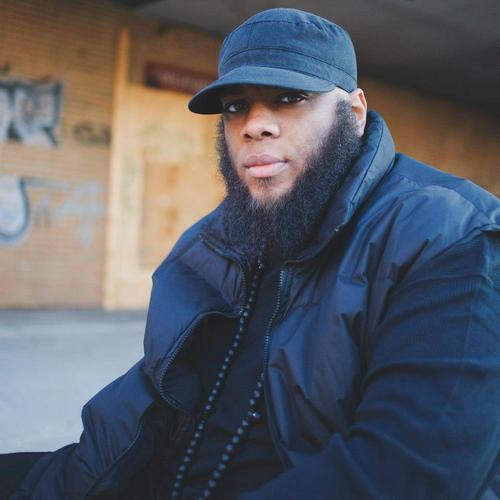 I still remember the first time I heard Gas Mask by The Left. Apollo Brown’s beats hit hard as per usual and that’s what first drew me in. As I played the album over and over I couldn’t get enough of the lead MC, Journalist 103. To put it bluntly, the man has a way with words that few in hip-hop have today. His rhymes are laced with social, economic and political anecdotes, and are an example of why hip-hop is educative. The passion he has for music is evident in every track he’s done and is a main reason why we wanted to talk with him. Last week, I drove down to Detroit and met him at the Al-Aqabah Islamic Community Center right off Joseph Campau Street. Once I was there, we just sat down and talked hip-hop. There are many things that we touch on in this interview. We talk about his childhood, Islam, Eminem, Detroit, what hip-hop is and much more. I walked away from this interview realizing the power of hip-hop. For Journalist 103, hip-hop is something that is much more than a way to make money. For him, hip-hop is a way of life and the love he has for it shines through more than anything else. I don’t think I’ve met anyone who has the same amount of passion for hip-hop as Journalist 103 and I am honored that he was willing to share his thoughts with me.

END_OF_DOCUMENT_TOKEN_TO_BE_REPLACED

This past week, Lord Jamar of Brand Nubian, offered up some provocative statements regarding issues of race, power, homosexuality and ownership in hip-hop during an interview with Vlad TV. His comments provide us with the chance to think critically about how hip-hop can and should be defined. There is much that goes into this definition and it is worth thinking long and hard about. As I began to reflect on this interview, it became clear to me that Lord Jamar’s comments are doing the social movement of hip-hop a disservice. Lord Jamar is simplifying hip-hop down to a black and white issue and I wholeheartedly disagree with this line of thought. Lord Jamar is taking away from understanding hip-hop as a worldview, how it has grown and what it can do for people. On top of that, he is slighting every hip-hop artist involved in creating what it is today. In light of these comments, we must break down what he is saying because of hip-hop’s significance around the world.

END_OF_DOCUMENT_TOKEN_TO_BE_REPLACED

Film Review: Something From Nothing: The Art of Rap

Within the first five minutes of Something From Nothing: The Art Of Rap, the 2012 film by Ice-T, the importance of hip-hop is unmistakable. As Ice-T explains, “I really felt that I had to do this movie because rap music saved my life.” Ice-T, the MC, actor and personality from New Jersey and L.A. doesn’t try to hide anything about his film. Here, Ice-T focuses on what being an MC is all about: it is about the craft of writing verses and the skill it takes to deliver them in the studio and in front of a crowd. What emerges is the artistry contained within the music, the power of writing and an important history lesson about the origins of hip-hop and how it has evolved over time. Ice-T puts this into words, “This movie isn’t about the money, the cars, the jewelry, the girls; this film is about the craft.” In order to educate people on the craft, Ice-T sits down and talks with legends of hip-hop.

Mixed with artistic overhead shots of New York, Detroit and Los Angeles, this film contains interviews from the various legends that transformed rap music. Ice-T sits down with MCs and producers such as Grandmaster Caz, Afrika Bambaata, Rakim, Nas, DJ Premier, Chuck D, Ice Cube, KRS-One, Dr. Dre, Royce da 5’9”, Eminem, Immortal Technique, Yasiin Bey, Big Daddy Kane, Raekwon and Melle Mel, and talks to them about their favorite artists and verses of all time, their writing process and what hip-hop means to them. With this movie you get the feeling that Ice-T decided to be generous and allow you to sit in and get a glimpse at the lives of rap royalty. It’s amazing to hear Rakim talk about growing up, inspired by listening to the jazz his mother would play. With The Art Of Rap, Ice-T makes it possible to know more about the MCs behind the verses we know and love. Not only that, we also get the privilege of seeing almost every MC in the movie do an a cappella verse where they showcase their talent with words. It is a sight to behold as Nas, Immortal Technique, Yasiin Bey and Eminem drop rhyme after rhyme straight from the dome. The best part of this film is learning about the writing process of each MC.

For example, Dana Dane, the MC from New York, talks about how he writes verses:

Dana Dane is engaged in the practice of literacy and makes it possible to get a glimpse into the amount of work it takes to write a truly masterful verse. Grandmaster Caz, an extremely influential MC, is shown working on a verse multiple times. Between hits from a blunt, he is seen writing on a notepad, whispering the words to himself. It may seem that MCs always have the words–in some cases they do–but it also takes a lot of effort to write high-quality rhymes. In the film, every MC has a different writing process and a different opinion on hip-hop. However, what surfaces across the board is the social context from which hip-hop originated.

The first interviewee is Lord Jamar from Brand Nubian. In this interview he describes where hip-hop came from:

“We created something from nothing with hip-hop. With the whole spirit of what hip-hop is. It was at a time when they were taking instruments and shit out of the schools and all of that type of shit. See, black people used to be pretty musical back in the day. It wasn’t unusual for a motherfucker to know how to play the piano or guitar or some sort of horn or some shit like that. At some point, all of that shit was removed from us. Through economics, cutting things outta schools and all that. So they try to take the music from us when we had created an original American music, which was jazz. So what did we do? We had no fucking instruments, no horns, no drums, we’re living in the fucking city and all this, we ain’t got room for that shit anywhere up in the projects or wherever the fuck you’re huddled in at. So what did we do? We took the fucking record player, the only thing that’s playing music in our fucking crib and turned it into an instrument.”

Hip-hop happened because it had to, because it was a way to resist the continued racial oppression that people of color faced following the Civil Rights Era. Similar to today, the funds for the fine arts are being removed from places that need it most. Hip-hop won’t die because it is an art form of resistance. As long as oppression and injustice remain, hip-hop will as well. Hip-hop is a means of agency and self-determination and Ice-T’s film embodies this spirit.

If you are looking to learn more about hip-hop culture and its impact on society, Something From Nothing: The Art Of Rap is worth watching. Containing countless interviews with renowned artists, Ice-T’s film highlights the skill needed to be an MC, the history of hip-hop and how it is a form of resistance. Ice Cube refers to his style of hip-hop as “Street Knowledge.” Street knowledge is about, “Letting the streets know what the politicians is trying to do to them. And then, letting the politicians know what the streets think of them, if they listening.” This is an essential point to make in that it grounds hip-hop within the political, social and economic contexts of our communities. This takes hip-hop to another place in that it is directly influenced by the living conditions of the artists and their communities. Ultimately, Ice-T’s film is about the craft of rapping, for which he makes this very clear.  However, it is also a testament to the worldview that is hip-hop.

Check out the trailer for Something From Nothing: The Art of Rap below!