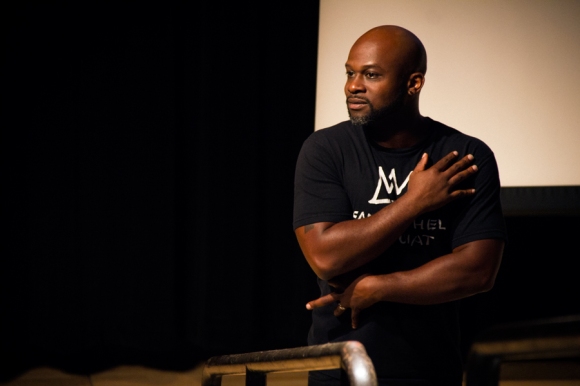 Last week, I had the privilege to witness Marc Bamuthi Joseph perform in the RCAH Theater located on Michigan State’s Campus, in East Lansing, Michigan. To say the least, it was an extraordinary experience encompassing poetry, dance, hip-hop, critical race theory and everything in between. At times, it was as if Marc was channeling an other-worldly force light years away from planet Earth. His being became living, breathing art—an animated meditation on the black experience in contemporary America that is as intimate as it is enlightening and as terrifying as it is hopeful. But before I get into the magic that was Marc’s performance, allow me to breakdown what makes this man so special.

Originally, Marc was simply a spoken-word poet. After winning the National Poetry Slam in 1999, he began to experiment with poetry and movement, incorporating elements of tap, ballet, breaking and miming in his performances. Since then Marc has become “one of America’s vital voices in performance, arts education, and artistic curation” by continually pushing the boundaries of “traditional” theatre and reimagining the power of poetry and language. His accolades include, but are not limited to, gracing the cover of Smithsonian Magazine after being named one of America’s Top Young Innovators in the Arts and Sciences, an inaugural recipient of the United States Rockefeller Fellowship that recognizes 50 of the country’s “greatest living artists,” the 2011 Alpert Award winner in Theatre, and in April 2013, he was one of 21 artists to be named to the inaugural class of Doris Duke Artists. 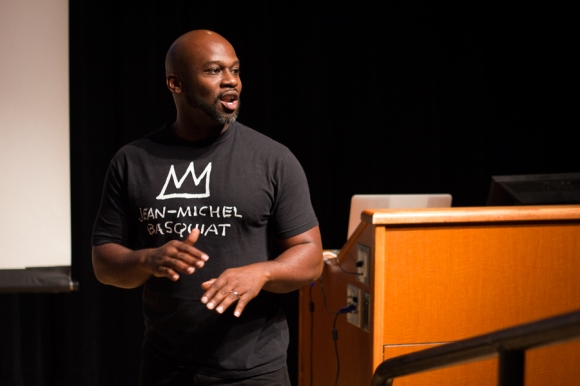 Now, back to the magic: witnessing Marc perform in the flesh. That night, after a brief introduction, he got right down to business. First, he made us define a few words, which were central to his whole act: hate, greed, neglect, racism, self-hate and capitalism. Some of our responses were simple, i.e. hate is “misunderstanding,” while some were more academic, “capitalism is an economic system in which trade, industry and the means of production are largely or entirely privately owned and operated for profit.” From these definitions, Marc went seamlessly into his first piece, Word Becomes Flesh.

He began by using these words to develop a creation myth for what he referred to as the “Almighty Nigger Mentality,” a mentality that was created to oppress the African-American community through the siblings Racism and Self-Hate—the love children of Capitalism and Greed. Then, he broke into a spontaneous spoken-word/dance number that detailed the woes of the black community while simultaneously miming a lynching. Between every line, Marc let out a deep breath, and with every breath, the noose got tighter. Next, as if suddenly returning to Earth, Marc went into a causal dialogue about his relationship with his Haitian father. As a young boy, Marc wanted to learn how to tap dance. This didn’t please his father who saw it as part of Euro-American culture. But to Marc, the rhythms of tap were the rhythms of African drums, that slaves, ripped from their homeland, stripped of their traditional instruments, used their feet to keep the rhythm going on those long days in the plantation fields—because, you know, slave owners would never cut their slaves’ legs off.

Then he went right back into another section of Word Becomes Flesh detailing the inner-conflict of a soon-to-be father: should he stay and become a father, or should he run away as the “Almighty Nigger Mentality” would like him to? As Marc would later explain, with much joy, he decided to stay, his son now a teenager. The title of the piece, Word Becomes Flesh, then came full circle. Not only did Marc’s words literally become flesh through choreographed steps and miming, but also he gave his word, his promise, to stay, and now his son, an abstraction in the womb, is living flesh. This story, interwoven with over-arcing narrative of creation myth, allowed us into the intimate depths of Marc’s life while reaching outward to struggles of black manhood throughout the United States.

The second part of his performance was a few sections from his choreopoem red, black, & green: a blues, which focuses on social justice, activism and sustainability within minority communities—communities who are often absent from mainstream environmentalist movements. This piece was inspired by his work with the Life is Living project, which Marc spearheaded himself with the help of his community in Oakland, California. The idea behind the project is to create safer spaces where minority communities can come together and proactively change their environment through sustainable measures. Instead of using the term “Green” that most environmentalist groups use, which comes with many connotations, Marc decided to use the term “Life,” hence the project’s name, Life is Living (http://youthspeaks.org/lifeisliving/aboutus/). Since it’s inception, the Life is Living project has created numerous dialogues on the importance of sustainability and community across the country. It has even perked the interests of hip-hop legends such as Mos Def, Talib Kweli and ?uestlove.

He concluded on a spoken-word piece about gang violence, which is the harsh reality for many black teenagers in America. The piece was specifically about a Sudanese mother he had met while working with the Life is Living project in Chicago. Her son, and several other young men, were senselessly gunned down on a street corner. This is a tragedy that is all too common in oppressed communities around the world. The poem detailed his conversation with this particular mother, who continuously “spat seeds to the ground.” It was raw; every word, every movement, all synchronized to display the physical, emotional, and spiritual tension young black bodies face on a daily basis. It was as if the dead, as if this mother, was directly speaking through Marc.

Despite the serious subject matter, Marc sustained a light-hearted vibe throughout the night. He was engaging—often running up and down the steps of the theatre, jumping, twirling, spitting poetry like madman—and kept everyone on the edge of their seat. It was truly a unique experience, unlike anything I could have imagined. To share that theatre with Marc was an honor, and an inspiration. It was not only a testament to the indomitable human spirit, but also to the reality that art can be magic.

Hip-Hop Happenings and Collaboration: March of the Drums for Stacy

Last Friday, I had the privilege to attend my first “beat battle.” The event was put on by our friends at Back Beat Magazine and All of the Above, a hip-hop academy based out of Lansing, Michigan. The event was a fundraiser for Michigan State graduate Stacy Blakeslee, who was recently diagnosed with a severe staph infection that has spread to her brain. Because of gaps in insurance coverage, and America’s faulty healthcare system, Stacy’s family has been burdened with hospital bills and other medical/emotional expenses. Considering the situation, it only makes sense that the hip-hop community would reach out and help a local family in need; and I must say, this event was all about the love and support for Stacy and her family.

END_OF_DOCUMENT_TOKEN_TO_BE_REPLACED

In this installment I will quickly go over some interesting storylines that have happened thus far in the tournament. I will also assign more hip-hop cuts to teams in the Sweet Sixteen and re-predict the Elite Eight and Final Four given what I’ve seen so far.

Ah, what a first weekend it was. There was a load of barnburners (SF Austin and VCU, Kentucky and Wichita St.), the pleasantly shocking upsets (Dayton, Mercer, Stanford) and the merciless dominance of some heavy-hitters (Arizona, Baylor, Michigan). This goes without saying that, just like any other year, this year’s parity played itself out like a finely tuned fiddle. Who would have predicted a Dayton vs. Stanford Sweet Sixteen game in Memphis? Who had Tennessee playing Michigan in Indy? Would you have guessed Baylor had the power to hold Doug McDermott, one of the greatest offensive players in the history of college basketball, to just 15 points in a 30 point thrashing of McDermott’s Creighton Blue Jays? Smell that? Mmmm madness.

END_OF_DOCUMENT_TOKEN_TO_BE_REPLACED

In this installment I will try to predict some March Madness outcomes, while at the time assigning certain teams a song that best fits their season and chances of taking home the hardware. Warning: you might not want to follow any advice I give, because I’m pretty sure the last couple of years I’ve ended up around the 60th percentile. But hey, in 2005 I won my father’s office pool!

END_OF_DOCUMENT_TOKEN_TO_BE_REPLACED

Eoin Nordman and Taylor Cunningham call themselves Mumbai, a duo with much more on their plate than a lot of artists in their prime. Grappling an arsenal full of sounds, from all spectrum’s of this world, Mumbai dishes a hip-hop hybrid of sorts that insists we all must accept change. From ukelele introductions, intricately spit bars and well-placed samples, to melodic trombone and trumpet breakdowns, Heart / Break In Lo Fi is a swelling mass of diverse mastery rarely played these days. This record makes us think, not only about ourselves and how we perceive every facet of life, but about the future. With the numerous guest contributions and variety of instrumental input, this record shows us that coming together as one isn’t a farfetched goal, and by the sound of this record, it’s actually pretty damn fun.