3 Comments
Album of the Week

Album of the Week: “Power in Numbers” by Jurassic 5 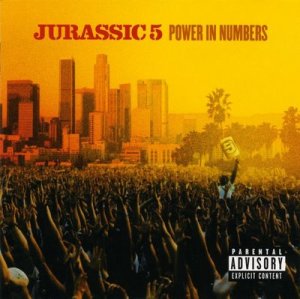 One of the most influential aspects of an album comes from within, spreading as if controlled by the sprawl of a story or concept. Usually constructed through varying themes and messages and having them intertwine, these albums have added value, something that is harder to achieve than the ones that simply go through the motions. Jurassic 5’s third studio album Power in Numbers not only strides high on this characteristic, it winds it into a complex that rises as one of the best themed hip hop albums of our time.

Perhaps the biggest credit to this should be given to Cut Chemist and DJ Nu-Mark and their approach to Power in Numbers’ production. Unlike Quality Control, where the beats were more of a front-stage showcase, Power in Numbers grants more freedom to the group’s four emcees as they sling tales of poverty, urban remembrance and government enforcement. On “Thin Line,” which features Nelly Furtado, Jurassic 5 strikes passion in a deeper sense. “Man too bad that we became friends first,” Zaakir spits, “I’m not an expert on how relationships should work/But from the minute it was known/It changed the whole tone on how we spoke on the phone.”

Further on, Power in Numbers also makes you realize how great these artists are when they’re together.

Songs like “If You Only Knew” and “Freedom” display the group’s ridiculous skill at twisting four-bar verses effortlessly, and even when these songs eventually feel like they should be dragging, someone steps in and pushes it along with force and viscosity. Whether in the delivery, flow or cadence, Chali 2na, Akil, Zaakir and Mark 7even keep everything fresh, while at the same time bombarding the listener with interweaving storylines from lush thematic landscapes.

On the surface, Power in Numbers may play like any other culturally bright Hip hop album, but after several listens it becomes apparent that it’s much more than that. In every sense this album consists of capacity whether it be the flow of the verses, the plinking and plunking production, the special guests (Big Daddy Kane, JuJu, Kool Keith, Nelly Furtado, Percee P) or the messages themselves. Hitting so many platforms and launching like the unique vector it is, Power in Numbers is a must for any definitive Hip hop fan.

The first song I heard off of Jurassic 5’s 2002 album Power in Numbers was “If You Only Knew.” I was captivated by the fresh jazzy boom bap that to this day makes me nod my head every time I hear it. I feel this way about most of the songs on this album; “What’s Golden,” “Break,” “One Of Them” and “After School Special” are bangers. If this were an instrumental album, Power in Numbers would stand out. However, once you take a step back from the syncopated beats, jazzy guitar samples and hard-hitting synth chords you realize that MC’s Chali 2na, Akil, Soup, Marc 7 and Zaakir are providing important social commentary though their lyrics in critical, honest and clever ways.

In “Freedom,” Chali 2na explains, “Got people screaming free Mumia Jamal/but 2 out of 3 of ya’ll will probably be at the mall.” In the hook of “If You Only Knew,” we hear, “If you only knew the trials and tribulations we been through/But if you only knew, we’re real people homie, just like you/We humble, but don’t mistake for some corny-ass crew/What we do, is try to give you what you ain’t used to.”

They aren’t bragging or boasting about their escapades with women or proclaiming themselves as the best rappers of all time. Instead, J-5 is explaining what they’re about musically, and the struggles it took to arrive on the scene. In this album, you will find poignant critiques of our social and political institutions. The group also takes the time to discuss matters of love, romance and friendship in the song “Thin Line” featuring Nelly Furtado. Just when you thought it couldn’t get any better, “A Day at the Races” will play. This song features rap legends Big Daddy Kane and Percee P, that show they can still hang with any of the young guns in hip-hop.

This album is an essential listen to anyone interested in Hip hop because it is an illustration of how a group can combine original musical production with inventive lyricism that moves the conversation about how we live, and what we value to the next level.

“If You Only Knew”
“What’s Golden”
“Freedom”