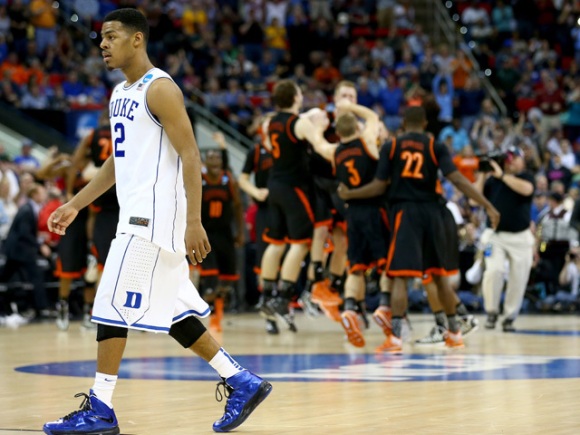 In this installment I will quickly go over some interesting storylines that have happened thus far in the tournament. I will also assign more hip-hop cuts to teams in the Sweet Sixteen and re-predict the Elite Eight and Final Four given what I’ve seen so far.

Ah, what a first weekend it was. There was a load of barnburners (SF Austin and VCU, Kentucky and Wichita St.), the pleasantly shocking upsets (Dayton, Mercer, Stanford) and the merciless dominance of some heavy-hitters (Arizona, Baylor, Michigan). This goes without saying that, just like any other year, this year’s parity played itself out like a finely tuned fiddle. Who would have predicted a Dayton vs. Stanford Sweet Sixteen game in Memphis? Who had Tennessee playing Michigan in Indy? Would you have guessed Baylor had the power to hold Doug McDermott, one of the greatest offensive players in the history of college basketball, to just 15 points in a 30 point thrashing of McDermott’s Creighton Blue Jays? Smell that? Mmmm madness.

END_OF_DOCUMENT_TOKEN_TO_BE_REPLACED

A Bonus Cut Feature: An Interview With DJ Soko

Last week I was in New York City visiting a friend and was able to sit down with Michigan native DJ Soko, a current resident of Brooklyn. Soko has been involved in hip-hop for over ten years but his emergence onto the scene as an artist is still relatively recent. That being said, he has been extremely active on the 1’s and 2’s between DJ’ing at parties and for MC’s such as Journalist 103 and Kopelli. In 2010 he teamed up with Journalist 103 and Apollo Brown to form The Left. The trio put out Gas Mask, one of the most critically acclaimed hip-hop albums of the past five years. Soko is somebody that is very proud of where he is from and the particular sound and image that is associated with the Detroit hip-hop scene. On top of that, he is an artist that loves what he does and cares deeply for the integrity of his craft. It was a true honor to have the chance to sit down and talk with him about his experiences and passion for hip-hop.

END_OF_DOCUMENT_TOKEN_TO_BE_REPLACED

Album of the Week: “Gas Mask” by The Left

The Left consists of Apollo Brown, Journalist 103 and DJ Soko. I feel compelled to lay this out on the forefront right away, because if these three names aren’t showcased, then Gas Mask and its ability to showcase collaboration will go right over your head. See, without each fundamental piece, Gas Mask fails immensely. On the beats, Apollo Brown throws down robust production that melds haunting samples with industrial backbeats. Journalist 103 compliments the beats by running parallel beside them, and DJ Soko throws in cuts that enhance the track and engage the listener. Beyond this, Gas Mask is a record that throws hip-hop survival in your face. With an ever-changing Detroit, The Left prove that they’re the “status of legends” by sticking with the environment and preaching their experiences at every turn.

“Chokehold” is an immediate example of this. It cruises sonically, with swelling horns and stretched vocal samples, and on top of this, Journalist 103 and Paradime lyrically shape the track to their liking. There’s a definitive difference between their styles, but both of them manage to stay on top of Apollo’s production with ease. The breakdown in “Chokehold” is the most impressive feature however, where the horns march accordingly until the breakbeat kicks in and the MCs grasp the mic. “Only a few can ride beside me,” Journalist 103 slings. “I rep the home of big Proof and Dilla that’s where you’ll find me.”

The guests on Gas Mask are more than just respectable MCs made to fill a record; they’re imperative to its success. From Guilty Simpson to Frank West, the “extras” on this record enhance its sound and improve it beyond normal means. On “Statistics,” a song that poignantly thrashes the “stat game” of America, guest MC Invincible lays down one of the most impressive verses on the whole record. “So free your mind up, this is a reminder / The United States incarcerates more than they do in China / We only 5 percent of all the world’s pop but / It’s 25 percent of all the world’s locked up / So I wonder how to break the cycle will it ever stop? / If we see people as numbers than we make them check a box.”

If Gas Mask is the best hip-hop record Detroit’s made in the last five years, then I really wouldn’t mind. At times, this record seems stressed, but when looking at the bigger picture, that’s exactly what The Left had intended. Gas Mask is the fight, the struggle, the liveliness and the celebration of Detroit, and very rarely does ANY record accomplish such a feat regarding its given city.

Released by Mello Music Group in 2010, Gas Mask, by The Left is made up of Apollo Brown, Journalist 103 and DJ Soko. This record begins with the classic hip-hop intro track. There is the sound of static and it sounds as if a radio dial is being shifted from station to station. From there we are thrown right into the fire on the first full-length cut, “Gas Mask,” where Journalist 103 describes the state of mainstream hip-hop. Over a flawlessly crafted Apollo Brown track complete with horns and trademark kick drum and snare, Journalist 103 is off:

“I had a vision when I started spittin’ / To be a part of the hip-hop conglomerate amongst the illest / But right now it’s a real sickness, an epidemic of gimmicks is being spread through your sound system / Not everybody gotta dance, sing along with it / Just lean, snap and pop back and you’ll get it.”

As the album progresses, the realness of The Left continues to take shape. By the start of the third full-length song, “Binoculars,” Gas Mask emerges as an example of how the collaboration of artists can be used to create engaging content without sacrificing the message they wish to convey. In this case, The Left uses music to describe the city of Detroit, the status quo of popular music, profiling based on race and gender and how they process that experience.

From a production standpoint, Journalist 103 and a myriad of guest appearances from the likes of Guilty Simpson, Invincible, Marvwon and Hasaan Mackey flawlessly compliment the gritty, soulful style of Apollo Brown’s beats. For instance, without the forceful, slightly irregular hi-hats, steady kick drum and splattering snare hits, the song “Statistics” would not be as impactful. With the beat, Journalist 103 and Invincible are able to go to work and tell the story of a man and a woman fighting to survive while facing the disastrous effects of stereotypes based on race, gender and socio-economic status. As it is stated at the end of 103’s verse, “Either the grave or the cell’s what I’m headed for / Cause based off of the statistics I’m prepared for it.” With Invincible’s verse, she tells the story of a woman reaching out for help”

“Every life has got about as much a chance of surviving the circumstances as guessin’ Joker’s coin flip / Made an appointment and she met up with the welfare / Office tried to get a bit of medaciad and healthcare / But they had jumpin through the hula hoops / To get some help is hard as tryin’ to pull a tooth / Her heart, it wasn’t bullet proof.”

These lyrics would be powerful regardless of the beat. However, their meaning is amplified by Apollo Brown’s ability to craft strong beats that accentuate the story the MC is trying to tell.

This is true of the entire album, making it an engaging and educational listen. The best part of this record is that it never gets boring. For me there is always something new that I didn’t catch the first time around. Besides that, the subject matter within the album is important to think about and attempt to change in our everyday lives. If you’re looking to hear some fire, think about something from a different perspective and suffer from whiplash from nodding to the beat that Gas Mask is for you.